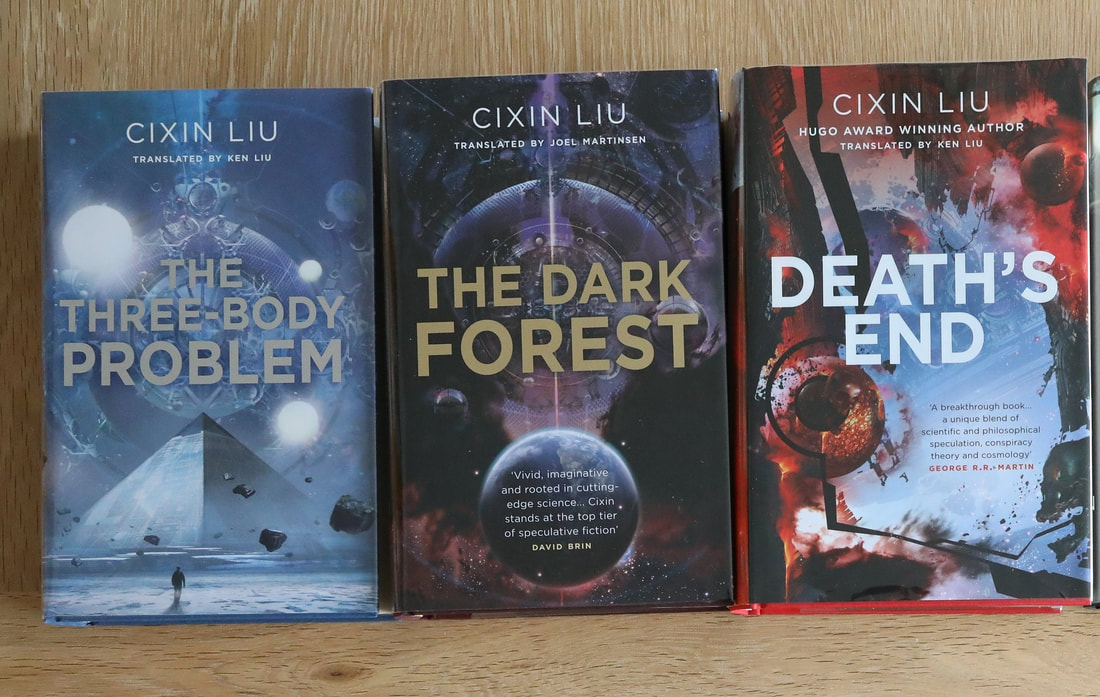 1967: Ye Wenjie witnesses Red Guards beat her father to death during China's Cultural Revolution. This singular event will shape not only the rest of her life but also the future of mankind.

Four decades later, Beijing police ask nanotech engineer Wang Miao to infiltrate a secretive cabal of scientists after a spate of inexplicable suicides. Wang's investigation will lead him to a mysterious online game and immerse him in a virtual world ruled by the intractable and unpredictable interaction of its three suns.

Imagine the universe as a forest, patrolled by numberless and nameless predators. In this forest, stealth is survival - any civilisation that reveals its location is prey.

Earth has. And the others are on the way.

The Trisolarian fleet has left their homeworld and will arrive... in four centuries' time. But the sophons, their extra-dimensional emissaries, are already here and have infiltrated human society and and de-railed scientific progress. Only the individual human mind remains immune to the sophons. This is the motivation for the Wallfacer Project, a last-ditch defence that grants four individuals almost absolute power to design secret strategies, hidden through deceit and misdirection from Earth and Trisolaris alike. Three of the Wallfacers are influential statesmen and scientists, but the fourth is a total unknown. Luo Ji, an unambitious Chinese astronomer, is baffled by his new status. All he knows is that he's the one Wallfacer that Trisolaris wants dead.

Half a century after the Doomsday Battle, the uneasy balance of Dark Forest Deterrence keeps the Trisolaran invaders at bay.
Earth enjoys unprecedented prosperity due to the infusion of Trisolaran knowledge and, with human science advancing and the Trisolarans adopting Earth culture, it seems that the two civilizations can co-exist peacefully as equals without the terrible threat of mutually assured annihilation. But peace has made humanity complacent.

Cheng Xin, an aerospace engineer from the 21st century, awakens from hibernation in this new age. She brings knowledge of a long-forgotten program dating from the start of the Trisolar Crisis, and her presence may upset the delicate balance between two worlds. Will humanity reach for the stars or die in its cradle?

​On his fourteenth birthday, right before his eyes, Chen's parents are incinerated by a blast of ball lightning. Striving to make sense of this bizarre tragedy, he dedicates his life to a single goal: to unlock the secrets of this enigmatic natural phenomenon. His pursuit of ball lightning will take him far from home, across mountain peaks chasing storms and deep into highly classified subterranean laboratories as he slowly unveils a new frontier in particle physics.

Chen's obsession gives purpose to his lonely life, but it can't insulate him from the real world's interest in his discoveries. He will be pitted against scientists, soldiers and governments with motives of their own: a physicist who has no place for moral judgement in his pursuit of knowledge; a beautiful army major obsessed with new ways to wage war; a desperate nation facing certain military defeat.