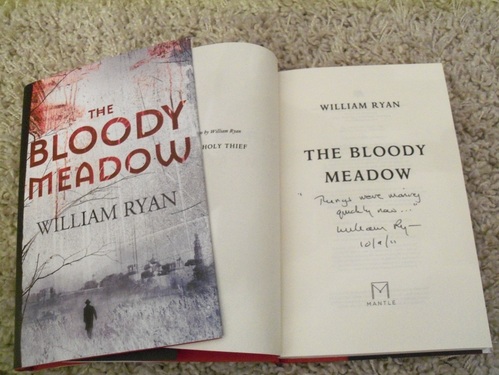 Synopsis : Following his investigations in The Holy Thief, which implicated those at the very top of authority in Soviet Russia, Captain Alexei Korolev finds himself decorated and hailed as an example to all Soviet workers. But Korolev lives in an uneasy peace his new-found knowledge is dangerous, and if it is discovered what his real actions were during the case, he will face deportation to the frozen camps of the far north. But when the knock on the door comes, in the dead of night, it is not Siberia Korolev is destined for. Instead, Colonel Rodinov of the NKVD security service asks the detective to look into the suspected suicide of a young woman: Maria Alexandovna Lenskaya, a model citizen. Korolev is unnerved to learn that Lenskaya had been of interest to Ezhov, the feared Commissar for State Security. Ezhov himself wants to matter looked into. And when the detective arrives on the set for Bloody Meadow, in the bleak, battle-scarred Ukraine, he soon discovers that there is more to Lenskaya's death than meets the eye ...