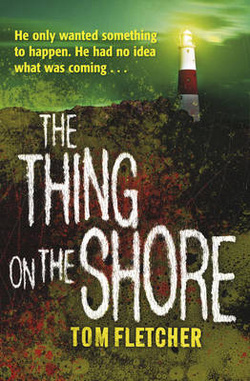 Paperback original (no hardback issued) -  these scarce 1st edition copies have been signed and dated by the author to the title page.

Synopsis : The Thing on the Shore takes place in a call-centre in Whitehaven, just a short hop from Sellafield along Cumbria's grim western coastline. When Artemis Black (from The Leaping) is assigned to manage the centre on behalf of a mysterious multinational corporation called Interext, the isolation and remoteness of the place encourage him to implement a decidedly unhinged personal project, installing what purports to be cutting-edge AI technology, with a real, 'human' voice, on the automated answering systems. As a result of Artemis' actions, one of his employees, Arthur, becomes aware of an intangible landscape inside the labyrinthine systems of the call-centre - a landscape in which he can feel some kind of otherworldly consciousness stirring and in which, perhaps as a result of his father's increasingly alarming eccentricities, he feels that he could find his recently deceased mother. Arthur takes refuge in this belief as his father, his job, and his house slowly deteriorate around him. He begins to conflate the mysterious, interstitial region that exists down the phonelines with the sea, as that was where his mother drowned. In a way he is right - Artemis' meddlings have attracted something, it is just not as benevolent as he thinks...