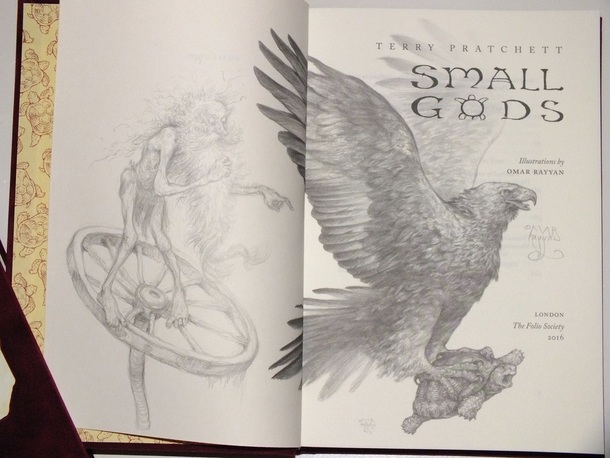 A : Sold
Signed and remarqued by the artist Omar Rayyan

Synopsis : What happens to gods when their believers stop believing? Published in series with Mort, this edition of one of the most celebrated Discworld novels features brilliant illustrations by Omar Rayyan.

‘Belief itself is the food of the gods.’ Unassuming novice Brutha has been chosen to hear the word of the Great God Om. However, Om – more usually known for appearing as a monstrous bull or a majestic swan – has fallen on hard times. It turns out that commanding unwavering respect is rather more difficult from the body of a small, scrawny tortoise. Still, Brutha might be the lowest rung in the Omnian church, but he is a true believer – surely that will be enough to dismantle hundreds of years of torture-fuelled corruption and avoid a holy war? Otherwise, Om will face the fate of all small gods, in which case even an endless diet of lettuce will start to look attractive.

The Discworld is ripe with gods – from the impressive inhabitants of Cori Celesti to P’tang-P’tang the newt god, worshipped by a grand total of 51 believers – and all of them need belief to exist. Without a single honestly meant prayer, the gods of the Discworld waste away to nothing, becoming half-heard whispers of temptation in the desert, while humans move on to the next big omniscient deity. It was always Terry Pratchett’s approach to examine human nature through the lens of fantasy fiction, and Small Gods, taking on the thorny subjects of organised religion, power and philosophy, is no small triumph. Searing in its satire but always deeply humane, it is packed with Pratchett’s familiar humour and witty footnotes. In her introduction to The Folio Society’s edition of 'Mort' , A. S. Byatt describes the author as not only ‘splendidly inventive’, but also ‘wise and morally complicated’.

Omar Rayyan has once again provided a series of sensitive illustrations which depict the inhabitants of the Disc, including Didactylos and his barrel, and the sinister Exquisitor Vorbis. The cover image depicts Brutha in the style of religious iconography, complete with a somewhat irate tortoise tucked under his arm. This edition has been published in series with the enormously popular 'Mort' and includes printed endpapers, a spectacular illustrated slipcase and an image of Great A’Tuin the turtle on the spine.

About the illustrator : Omar Rayyan is a US-based artist whose illustrations are featured in various games, children’s publications, magazines and illustrated books, including The Brown Fairy Book (2010) and A Traveller in Time (2012) for The Folio Society. His work has garnered many awards, including the Spectrum Fantastic Art Silver and Gold Awards, and the Chesley’s Lifetime Achievement Award. His paintings have been exhibited in museums and galleries around the US and Europe, and grace the walls of many art collectors worldwide. Omar currently resides on the island of Martha’s Vineyard off the coast of Massachusetts. 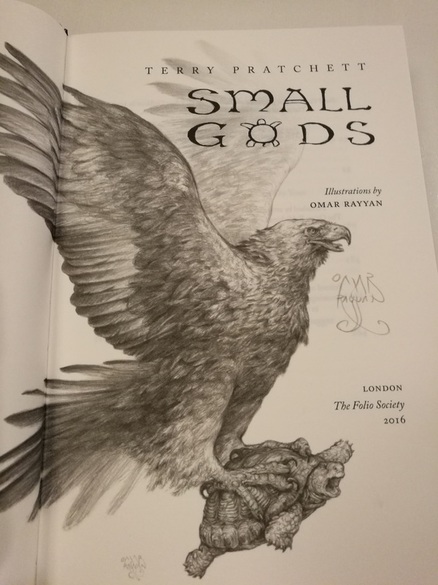