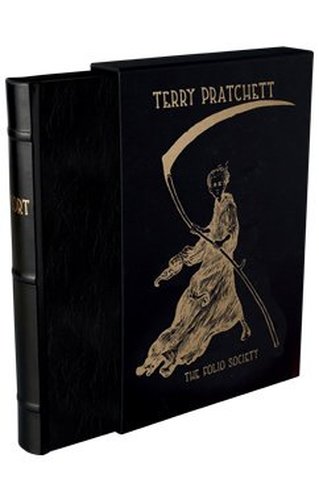 Not signed by Terry Pratchett (sketched and signed by artist only)

Introduced by A. S. Byatt

Remarqued / hand-Illustrated and signed by Omar Rayyan - the only known copy of this edition so treated.
​
One of the most loved titles in the enormously popular Discworld series receives its first fully illustrated edition in a LEATHERBOUND SLIPCASED LIMITED FIRST EDITION

Young Mort despairs of finding a suitable career in his provincial village, until one day he is rather unexpectedly hired by a bony figure in a cowl – Death, it seems, is in need of an apprentice … When Mort comes to the end of his adventures, his immortal employer gifts him a very special book – the book of Mort’s life.
This unusual limited edition is a 'facsimile' of the remarkable book from Death’s very own library.
​
In order to replicate the volume as imagined by Terry Pratchett, Mort is bound in black leather, with the title blocked in shiny gold leaf on the spine. This limited edition features a slipcase illustrated in gold, and comes with an exclusive print signed by the artist. With just 500 copies available, this is a unique chance for Pratchett fans to own a little piece of Discworld magic.

Synopsis : Young Mort despairs of finding a suitable career in his provincial village, until one day he is rather unexpectedly hired by a bony figure in a cowl – Death, it seems, is in need of an apprentice. Introduced to the chilly truth behind the workings of the universe, the inherently curious Mort cannot help but meddle with the laws of time and space. The resulting chaos means all manner of trouble for the stability of reality, not to mention his burgeoning love life …
​
Terry Pratchett wasn’t simply a master of his genre, conjuring one of fiction’s strangest and most beloved fantasy realms in the form of the Discworld; he was also a master storyteller, and one of our greatest modern writers. In her introduction for this edition, A. S. Byatt describes his ‘maddening and delightful’ imagination, and how the core of his work always contained a ‘reflection on the nature and language of things’. Whether following the personification of Death to a curry house or threatening the great city of Ankh-Morpork with a dragon, Pratchett’s focus was always on the humanity of his characters. He knew their passions, failings, hopes and desperations, revealing them with compassion and wisdom – and if the truth bit a little close to home for the reader, a joke would be along at any moment to take away the sting.

‘His gift has always been in treating the big subjects with the lightest touch and in smuggling huge banks of wisdom past unsuspecting, giggling readers’ : New Statesman

Omar Rayyan, a long-time fan of the Discworld series, has provided 7 colour illustrations that capture the humour and vibrancy of Pratchett’s remarkable creation. This beautiful collector’s edition features printed endpapers illustrated by the artist, a slipcase printed with a silver line drawing, and a cover bound in tactile velveteen cloth, with an illustrated inset paper label. The spine sports a tiny silver A’Tuin, the great disc-carrying turtle – truly an edition fit for the Unseen University’s very own library. 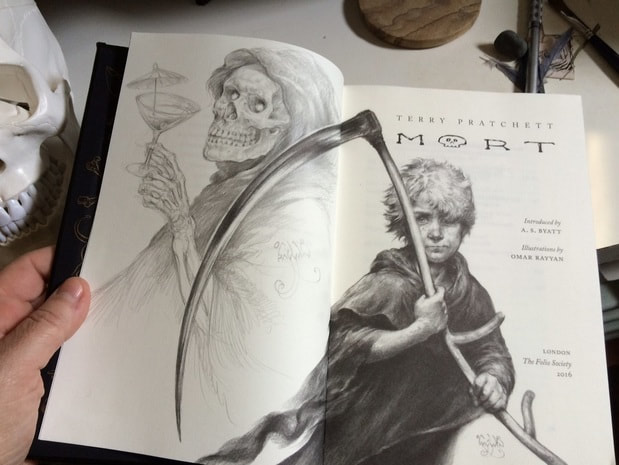 Hand-sketched by the artist - the only known copy of this edition to be so - only one copy available! 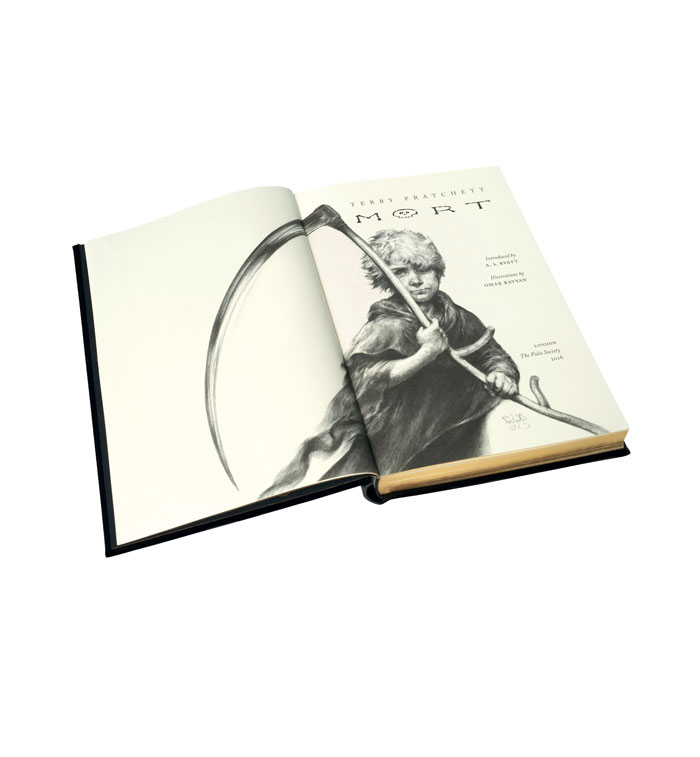