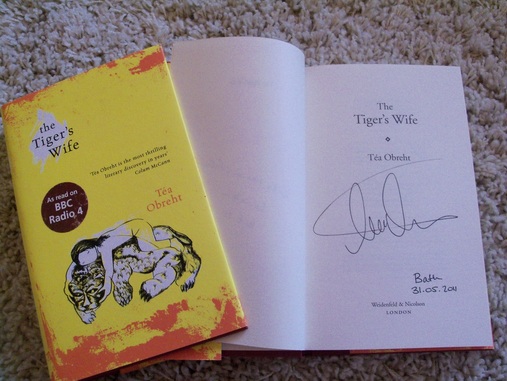 Debut title from the youngest winner of the Orange prize for Fiction in its 16-yeaR HISTORY. One of Waterstone's hotly-tipped "11 debuts of 2011", these scarce 1st edition copies have been signed, dated and located by the author to the half-title page. Also signed, dated and located to the title page by the cover artist Wuon-Gean Ho (who has also signed and dated the back jacket flap). THESE ARE THE ONLY SUCH DOUBLE-SIGNED COPIES IN EXISTENCE. I do also have signed and dated US first editions available (see the relevent page on this site). Also, a second impression copy of the UK edition that will be cheaper - please contact me if you are interested.

Synopsis : 'Having sifted through everything I have heard about the tiger and his wife, I can tell you that this much is fact: in April of 1941, without declaration or warning, the German bombs started falling over the city and did not stop for three days. The tiger did not know that they were bombs...' A tiger escapes from the local zoo, padding through the ruined streets and onwards, to a ridge above the Balkan village of Galina. His nocturnal visits hold the villagers in a terrified thrall. But for one boy, the tiger is a thing of magic - Shere Khan awoken from the pages of The Jungle Book. Natalia is the granddaughter of that boy. Now a doctor, she is visiting orphanages after another war has devastated the Balkans. On this journey, she receives word of her beloved grandfather's death, far from their home, in circumstances shrouded in mystery. From fragments of stories her grandfather told her as a child, Natalia realises he may have died searching for 'the deathless man', a vagabond who was said to be immortal. Struggling to understand why a man of science would undertake such a quest, she stumbles upon a clue that will lead her to a tattered copy of The Jungle Book, and then to the extraordinary story of the tiger's wife

The following was reported in The Guardian :

The winner of this year's Orange prize for fiction is Téa Obreht, a first time novelist and, at 25, the youngest author to take the award in its 16-year history.

Belgrade-born and New York-based, Obreht was given the £30,000 prize for women's writing at a ceremony at the Royal Festival Hall in London. Judges praised her debut novel, The Tiger's Wife, as evidence of a "truly exciting" literary talent.

Historian and broadcaster Bettany Hughes, chair of the judging panel, said the novel more than fulfilled the Orange prize criteria of being original, accessible and excellent. "It is a very brave book," she said. "We were looking for a book that had some kind of alchemy, that changed us as readers and changed the way we thought about the world and The Tiger's Wife certainly does that."

Obreht's publishers have had the manuscript, written while she was on Cornell University's creative writing course, since 2008.

Obreht said the award was a "tremendous honour" which would take a while to sink in. "I really did not expect to win and so when they called my name I had a very surreal moment of incredible happiness and just numb joy – I think later it will be followed by crying."

She said she started writing the novel when she was 22 and finished it aged 24. "To some degree I've always been the baby of everything because I skipped two grades when I was little – I'm used to the questions about age. I was in an emotionally difficult place with the death of my grandfather and I was asking a lot of questions and they resonated with readers, which is incredibly gratifying."

Last year her wunderkind status was cemented when she was the youngest member of New Yorker magazine's top 20 writers under 40. Her victory meant defeat for Emma Donoghue – bookies' favourite for the bestselling Room – and Nicole Krauss for Great House. Many had also fancied the chances of Aminatta Forna's The Memory of Love.

Hughes said it had been a difficult decision – the final session lasted more than four hours – and was not unanimous. "It was an incredibly exhilarating and very positive meeting and although judges were arguing very passionately for particular books, without exception everyone was delighted The Tiger's Wife won." The other judges were publisher Liz Calder, novelist Tracy Chevalier, actor Helen Lederer and broadcaster Susanna Reid.

Obreht's book is set amid the horrors and aftermath of Balkan civil war, mixing magic, myth and folklore with intense, tough realism.

Hughes said the novel "opened the doors and allowed us into the houses of people who have lived in the Balkans and suffered generations of chronic conflict and it asked what do you do, as a society, to deal with that? One of the things you do, to deal with that level of suffering, is you tell stories. For a prize which is a celebration of fiction and literature, it seems good to be honouring a book that puts storytelling at its heart." 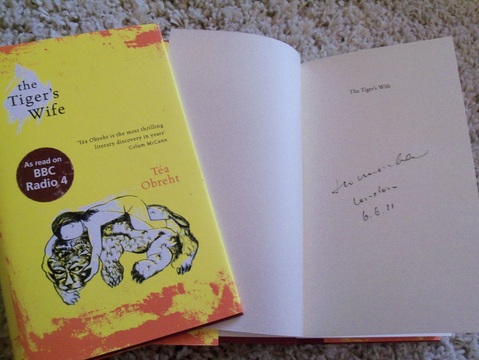 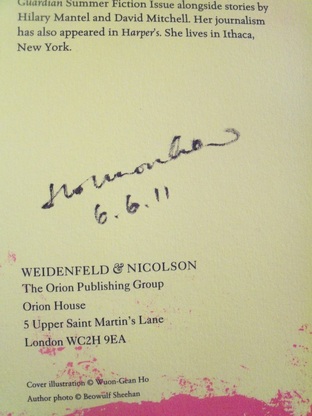