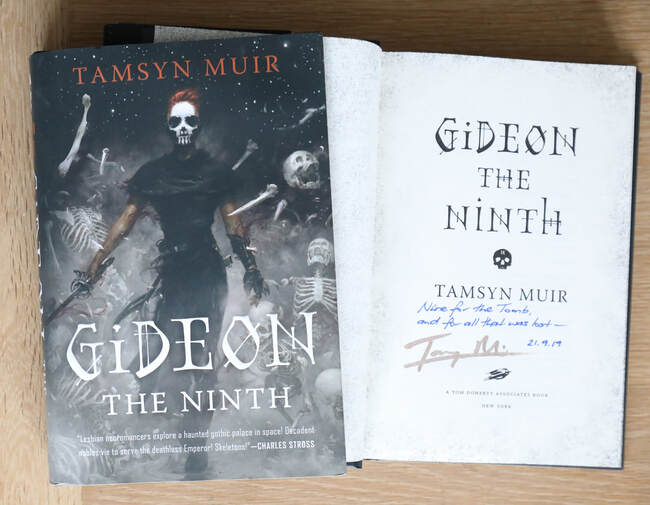 First edition, first impression with sprayed edges - signed, lined and dated by the author - signed to the jacket by cover artist Tommy Arnold

Gideon the Ninth may be the debut of the year, having racked up starred reviews from Publishers Weekly, Booklist, Library Journal, and Kirkus. Check the list below for the overwhelming (and deserved) amount of praise Gideon is receiving.

Synopsis : Gideon Nav would’ve loved—all right, preferred—to be orphaned anywhere but the Ninth. Raised as an indentured servant by its brutal necromancer nuns, and surrounded by rude servants and reanimated skeletons, she takes her few creature comforts where she can get them. Namely in the form of swordplay, dirty

magazines, and trying desperately to escape.
​
When the Emperor, Necromancer Divine, issues a summons to all the far-flung houses, Gideon finally gets a chance to slip the surly bonds of the Ninth… But in the name of saving the place she loathes. Gideon is forced to play cavalier for Harrowhark Nonagesimus, Reverend Daughter of the Ninth House, in a meeting that pits the houses against one another to see who can achieve the position of Lyctor and attain immortality. Harrowhark might win and prevent the Ninth’s ultimate demise, but only if she can keep Gideon at her side…

In Gideon the Ninth, the riveting first chapter of a debut trilogy, Nebula, World Fantasy, and Shirley Jackson Award nominee Tamsyn Muir has created a singular world filled with death that still manages to burst at the seams with life. With starred reviews from Publishers Weekly, Booklist, Kirkus Reviews, and Library Journal, this epic blend of science fiction, fantasy and horror filled with lesbian necromancers, deadly consequences, and unparalleled wit will enchant readers.

From Publishers Weekly (Starred Review):​  “Queer necromancers vie for power, solve ancient puzzles, and cross rapiers while exploring haunted deep-space ruins in this madcap science fantasy romp that manages to be both riotously funny and heartbreaking... The result is an addictive, genre-bending book that will wow readers with its vibrant energy, endearing cast, and emotional gut-punch of a finale.”

From Booklist (Starred Review):  “Muir’s debut fuses science fiction, mystery, horror, fantasy, action, adventure, political intrigue, deadly dark humor, and a dash of romance with a healthy serving of skeletons and secrets and the spirit of queer joy. This extraordinary opening salvo will leave readers dying to know what happens next.”

From Library Journal (Starred Review):  “At once sarcastic, sincere, heart-wrenching, and honest pulpy enjoyment, filled with dark magic, swordplay, and lesbian necromancers, Muir's debut is a fantastic sf/fantasy blend. Readers will discuss this journey for a long time and be clamoring for the next installment.”

From Warren Ellis:  “This crackling, inventive, and riotous book from an original voice is a genuine pleasure. Also the author is clearly insane.”

From V. E. Schwab:  “Unlike anything I’ve ever read. Muir’s writing is as sharp as a broken tooth, and just as unsettling. This book is visceral, vivid, and downright violent. In short, absolutely marvelous.”

From Rebecca Roanhorse:  “A brilliant and original mash-up of genres, the story is brimming with memorable characters, acerbic dark humor, and a unique magic system, space travel, decaying technology, layers upon layers of mystery. It is Gothic Space adventure I didn’t know I needed.”

From Max Gladstone:   “Both middle fingers raised to the galaxy, Gideon the Ninth has me positively giddy for the future of the genre.” 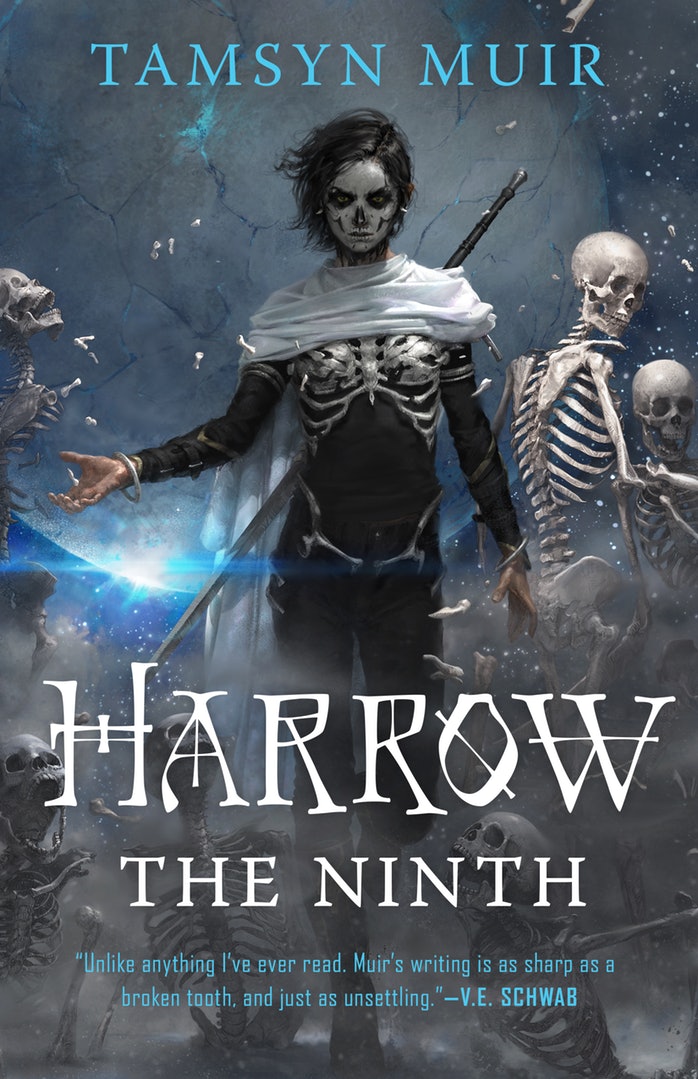 Coming in 2020 : The Locked Tomb book three - Harrow the Ninth