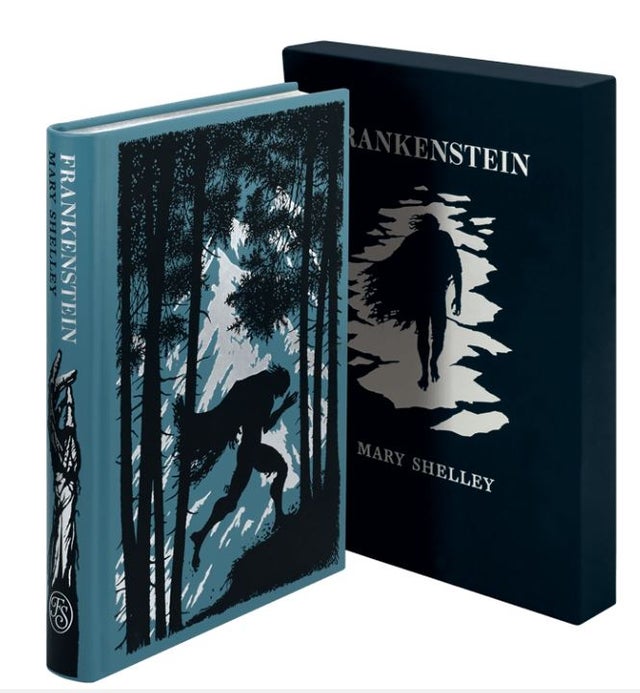 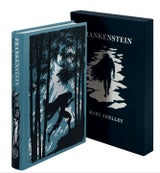 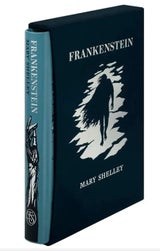 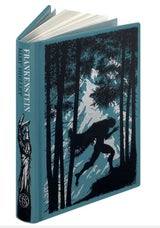 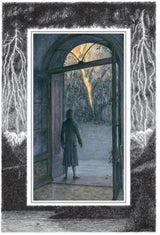 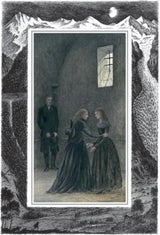 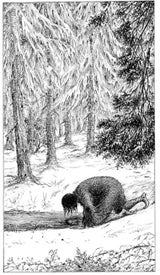 There can be few books as well-known as Mary Shelley’s Frankenstein. Adapted for stage, film and radio over 100 times, this chilling gothic tale is thought by some to be the very first science-fiction novel. For Folio’s fabulous limited edition, artist Angela Barrett has contributed eight ominously unsettling colour plates, two elaborate hand-drawn borders, nine intricate black-and-white vignettes, and a pair of striking designs on the ice-blue leather binding and black cloth-covered slipcase.

In June 1816 four friends gathered at the Villa Diodati beside Lake Geneva in Switzerland, where, confined indoors during the ‘Year without a Summer’, they devised a ghost story competition for their entertainment. Mary Shelley, the youngest participant at just 18, contributed the astonishing tale of Victor Frankenstein, a student of natural philosophy who galvanises into life a creature out of bones collected from charnel houses – a hideous monster of superhuman strength and size. Possessed of human needs and emotions, and educated through books, the creature craves acceptance in society and demands a female companion. His creator’s defiant refusal to provide one provokes the terrifying denouement. Thought-provoking as much as it is thrilling, Frankenstein is indebted to contemporary scientific experiments and philosophical debates, and Shelley unquestionably fulfilled her stated intention to create ‘a story to make the reader dread to look round, to curdle the blood, and quicken the beatings of the heart’.

Artist Angela Barrett’s contribution to this stunning limited edition is extraordinary. Created in series with her remarkable illustrations for Dracula, the eight colour plates, each one full of foreboding, are set within elaborate black-and-white borders. Nine superb vignettes represent further aspects of the story, from a finely detailed feather pen to an exquisite scene of the steeples of London, and her work is completed with a splendid design blocked in silver and black foils on the leather binding and another on the slipcase. Each book is signed by the artist on a hand-numbered limitation label. Award-winning biographer Richard Holmes has contributed an exclusive new introduction focusing on the scientific influences and cultural repercussions of the novel. From the gruesome disembodied hand reaching up the spine to the final haunting vignette, this limited edition is the perfect presentation of Mary Shelley’s ‘hideous progeny’ – her own definition of her gothic masterpiece.

Set in Clifford with Operetta as display

Silvered on all three page-edges