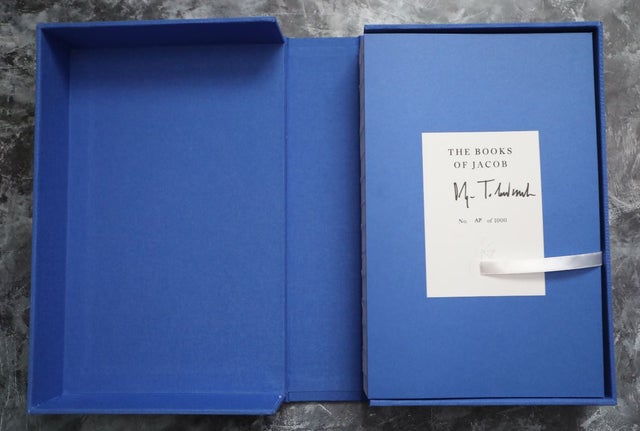 In the mid-eighteenth century, as new ideas begin to sweep the continent, a young Jew of mysterious origins arrives in a village in Poland. Before long, he has changed not only his name but his persona; visited by what seem to be ecstatic experiences, Jacob Frank casts a charismatic spell that attracts an increasingly fervent following. In the decade to come, Frank will traverse the Hapsburg and Ottoman empires, throngs of disciples in his thrall as he reinvents himself again and again, converts to Islam and then Catholicism, is pilloried as a heretic and revered as the Messiah, and wreaks havoc on the conventional order, Jewish and Christian alike, with scandalous rumours of his sect’s secret rituals and the spread of his increasingly iconoclastic beliefs. In The Books of Jacob, her masterpiece, 2018 Nobel Prize in Literature laureate Olga Tokarczuk writes the story of Frank through the perspectives of his contemporaries, capturing Enlightenment Europe on the cusp of precipitous change, searching for certainty and longing for transcendence.

‘[A] visionary novel ... Tokarczuk is wrestling with the biggest philosophical themes: the purpose of life on earth, the nature of religion, the possibility of redemption, the fraught and terrible history of eastern European Jewry. With its formidable insistence on rendering an alien world with as much detail as possible, the novel reminded me at times of Paradise Lost. The vividness with which it’s done is amazing. At a micro-level, she sees things with a poetic freshness.... The Books of Jacob, which is so demanding and yet has so much to say about the issues that rack our times, will be a landmark in the life of any reader with the appetite to tackle it.’

‘The Books of Jacob is a spellbinding epic, one of the great literary achievements of the decade: a poetically brimful recreation of the world of a Jewish false messiah in 18th-century Poland, but beyond as well to mystically drawn priests and errant aristocrats. Charged with a sensuous immediacy it’s the kind of hypnotic novel you not so much read as dwell in, and which then, magically, comes to dwell in you.’

‘In Tokarczuk’s telling this epic of myth and history is a celebration of cultural diversity, a plea for tolerance and – notwithstanding its impeccably researched historical setting – a contemporary story of borders, refugees and migration. Despite the novel’s great length, the world she has recreated is wrenching to leave…. Huge credit must be given to Croft, whose magnificent, lively translation is also a work of pure scholarship: the multiple voices, styles, landscapes and inventories she renders into English bring this lost world vividly to life…. As a reading experience, aspects of Tolstoy’s War and Peace are an obvious comparison; but so too is The Blue Flower, Penelope Fitzgerald’s epic in miniature of German Romanticism, and Hilary Mantel’s Thomas Cromwell trilogy: all immersive works in which the act of turning the pages is akin to surrender.’

‘Tokarczuk shows impressive skill in recreating an entire era and world, which ranges from Poland to Smyrna and Vienna. Yet her real genius lies in the cast of characters she has conjured up; dozens, each fully realised, from an emperor downwards.... She is also ambitious in her willingness to ask (and sometimes answer) extraordinarily large questions through these character studies.... Holding it all together for 900 pages is incredible, but that is not what makes this book great. Tokarczuk, unafraid and ambitious, creates a very fallible messiah, yet makes it seem reasonable and human to believe in his divinity. That is a kind of literary miracle.’

‘A panorama of early Enlightenment Europe that doubles as an open-minded study in the mysteries of charisma, it is perhaps above all – and aptly – a gargantuan act of faith, a novel in which your reading has barely begun by the time you’ve turned the last of its 900 pages.’

‘That many of the events Tokarczuk narrates are derived from historical sources is fascinating but essentially unimportant. What matters is the internal coherence of the world she creates through language and her ability to guide us through examinations of limitless faith and human failings; cultural identity and the ostracism of the other; the manipulation of the steadfast and the thoughtless cruelty of friends. Above all, she shows us our enduring search for meaning. This extraordinary novel is part of that search.’

‘With a backdrop that combines anti-Semitic persecution, the disintegration of the Polish-Lithuanian Commonwealth, and the Enlightenment, it is a text that begs to be read on the same terms as War and Peace.’

‘Thrilling…Indeed, the power and beauty of Tokarczuk’s writing, which shine through Jennifer Croft’s ebullient translation, lie, in part, in how tenderly she recreates the material as well as psychic reality of the actors in this strange, implausible drama, making them substantial, sympathetic, impossible to dismiss…Tokarczuk celebrates those who build, humbly, discreetly, outside the spotlight of history. They uphold the world.’

‘The Books of Jacob is an unruly, overwhelming, vastly eccentric novel. It’s sophisticated and ribald and brimming with folk wit. It treats everything it bumps into at both face value and ad absurdum. It’s Chaucerian in its brio…This novel’s density is saturnalian; its satire nimble; academics will tug at its themes, as if they were pinworms, for decades.’

‘The Books of Jacob takes its place alongside the great postmodern meganovels, Pynchon and Life: A User’s Manual, García Márquez and 2666 ... Olga Tokarczuk has learned to do the impossible: to write the novel of the collective.’

‘Olga Tokarczuk is inspired by maps and a perspective from above, which tends to make her microcosmos a mirror of macrocosmos. She constructs her novels in a tension between cultural opposites: nature versus culture, reason versus madness, male versus female, home versus alienation. Her magnum opus so far is the historical novel The Books of Jacob, portraying the eighteenth-century mystic and sect leader Jacob Frank. The work also gives us a remarkably rich panorama of an almost neglected chapter in European history.’

‘The novel’s central narrative is conveyed in unfussy, pellucid prose, which brims with detail while maintaining an energetic pace. Its varied voices are rendered distinctly…Reaching the end of this dazzling book, I also felt like a devoted disciple, of Olga Tokarczuk, impatient for her to return and lead me to new imaginary realms.’

‘The Books of Jacob conjures up a society flooded with the new thinking that emerged from the Enlightenment and the French revolution. Its central question — the answer to which remains tantalisingly out of reach — is why people believe in the likes of Frank. In the living, breathing, mysterious world he and his followers inhabit, Ms Tokarczuk shows how ideas, along with fables, myths and delusions, made the society in which he flourished, which in turn led to the world of today.’

‘A reading experience that is literally incomparable…Yes, there’s a miracle in these pages. It’s not about the Virgin Mary or the false Messiah Jacob Frank, however, but the way Tokarczuk can make a period so distant from us in every way feel so completely alive. In an era of cynicism about both spirituality and the capabilities of written fiction, that might be miracle enough.’

‘Like a sherpa, Tokarczuk guides us faithfully to the heights of imagination, where the seen and unseen commingle, where words suffuse the sky and ground like mist, and where we labor, tire, wonder, gain strength, shiver in frost and warm our hands by fire, glimpse apparitions, discover our species fossilized in ice, journey to the sky, and marvel at the beauty and mystery of life in that delicate, rarefied air.’

‘In terms of its scope and ambition, The Books of Jacob is beyond anything else I’ve ever read.’

‘Tokarczuk says that writing the book led her to understand that “so many things remain quietly connected.” The Books of Jacob ... challenges us to focus on the invisible similarities, the butterfly-effect linkages of fate and circumstance that don’t appear in traditional accounts of history or in contemporary nationalistic myths.’

‘This is the first of Ms. Tokarczuk’s books to arrive in English since she was awarded the 2018 Nobel Prize (it was published in Poland in 2014), and it’s just the kind of dense, monumental work that could help the Swedish Academy restore its rather tattered reputation as an arbiter of serious literature. Stretching across the latter half of the 18th century and circumambulating Eastern Europe and the Ottoman Empire, the novel recapitulates an astonishing amount of esoteric learning. Ms. Tokarczuk is as comfortable rendering the world of the Jewish peasantry as that of the Polish royal court.’

‘The Books of Jacob which details Frank’s eventful crisscrossing of Europe in the late 18th-century with his wide-eyed followers (known as Frankists), defies belief, so it is perhaps fortuitous it arrived in English — fastidiously and elegantly translated by Jennifer Croft — at the end of 2021, a time when truth had overtaken fiction in the race to incredulity.’

‘An occasion for English readers to experience a genuine global artistic event: the publication of a genre-broadening contribution to the historical novel ... The magic of the novel is that an encyclopedically researched account of a fringe schismatic denomination from nearly three centuries ago should feel so wildly contemporary ... the proximity and the distance of the past are thrillingly, simultaneously affirmed.’

‘One among a very few signal European novelists of the past quarter-century.’

‘Prodigious ... an impressive novel ... combining immense erudition to writing that is as fluid as it is poetic, Tokarczuk brings to life, over the course of a thousand pages, the epic story of a messianic group in a multicultural Poland.’

‘Can you write a 900-page novel that keeps you in suspense? Olga Tokarczuk succeeded.’

‘It is hard to imagine a more perfect pairing of writer and subject: Frank is complex, contradictory, his presence at once all-consuming and impossible to pin down; Tokarczuk is brilliant, sensitive, encyclopaedic, like a writer dreamed of by Borges.’

‘Undoubtedly the author’s magnum opus: a near 1000-page, deeply researched novel that aims to destroy any notions of linearity.’

‘It would be easy in lesser hands for the depth and detail of the material to overwhelm. Tokarczuk is far too skilled for that.’

Olga Tokarczuk is the author of nine novels, three short story collections and has been translated into forty-five languages. Her novel Flights won the 2018 International Booker Prize, in Jennifer Croft’s translation. In 2019, she was awarded the Nobel Prize in Literature.

Jennifer Croft was awarded the International Booker Prize in 2018 and was a National Book Award Finalist for her translation from Polish of Olga Tokarczuk’s Flights. She is the recipient of Fulbright, PEN, MacDowell, and National Endowment for the Arts grants and fellowships, as well as the inaugural Michael Henry Heim Prize for Translation and a Tin House Workshop Scholarship for her memoir Homesick.