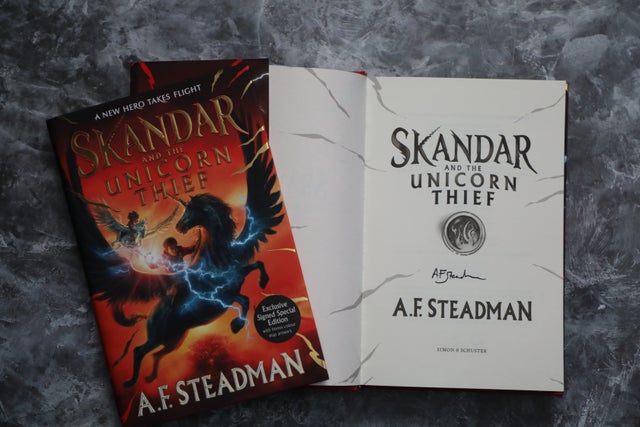 Soar into a breathtaking world of heroes and ferocious unicorns in this first book in the hotly anticipated fantasy adventure series for fans of Harry Potter, Percy Jackson and Amari and the Night Brothers.

Thirteen-year-old Skandar Smith has only ever wanted to be a unicorn rider. To be one of the lucky few selected to hatch a unicorn. To bond with it for life, to train together and race for glory, to be a hero.

But just as Skandar’s dream is about to come true, things start to take a more dagerous turn than he could ever have imagined. A dark and twisted enemy has stolen the Island’s most powerful unicorn—and as the threat grows ever closer, Skandar discovers a secret that could blow apart his world forever.....

Get ready for unlikely heroes, elemental magic, sky battles, ancient secrets, nail-biting races and ferocious unicorns in this epic adventure series that will have your heart soaring.Limited first edition, first printing with bonus fold-out map - new and unread. A debut title, first in a projected series - signed by the author.