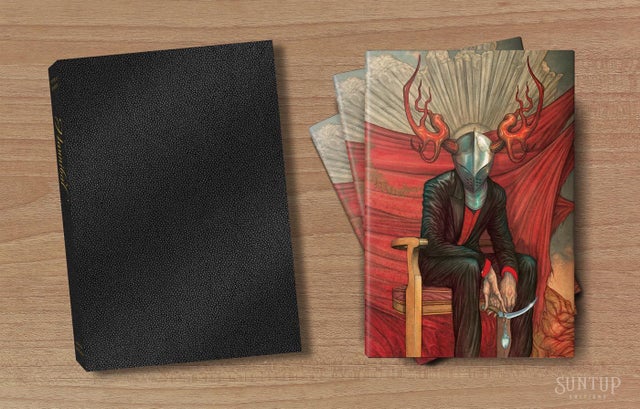 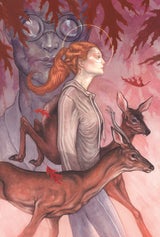 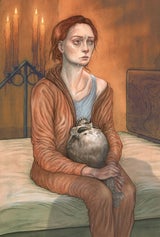 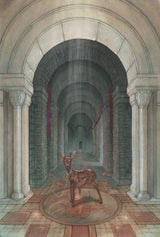 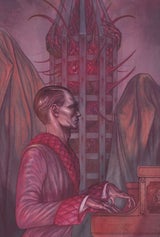 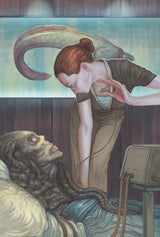 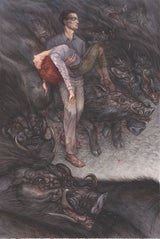 The Artist Edition is limited to 1000 copies with a double-sided dust jacket featuring two wrap-around illustrations by Jason Mowry. It is a full cloth, smythe-sewn binding with a foil stamped cover. End-sheets are illustrated, and it is the only edition of the three with the dust jacket. The edition is printed offset on premium archival Cougar Vellum paper, and is signed by Jason Mowry. It is housed in an embossed paper covered slipcase with an acrylic topcoat.Illustrations by Jason Mowry

Relentless and endlessly terrifying, Hannibal by Thomas Harris is the bestselling sequel to The Silence of the Lambs, and the third novel in the Hannibal series.

Seven years have passed since the events of The Silence of the Lambs. Hannibal Lecter is on the run in Florence, Italy and for three individuals, the final hunt has begun: a multimillionaire who Hannibal left horrifically maimed, a corrupt Italian policeman, and FBI agent Clarice Starling, who once stood before Lecter and has never been the same. All of them, in their separate ways, want to find Dr. Lecter, and all three will get their wish. But will they live long enough to savor the reward?

The publication of Hannibal in 1999 was considered one of the most eagerly anticipated literary events of the decade, with Thomas Harris taking us once again into the mind of his iconic serial killer, crafting a chilling portrait of insidiously evolving evil. Peers and critics alike hailed the novel a tour de force of psychological suspense. Stephen King opined, “Is it as good as Red Dragon and The Silence of the Lambs? No, this one is better. It is, in fact, one of the two most frightening popular novels of our time, the other being The Exorcist.” The Los Angeles Times raved, “Hannibal speaks to the imagination, to the feelings, to the passions, to exalted senses and to debased ones. Harris’s voice will be heard for a while.”

In 2001, Hannibal was adapted into a film directed by Ridley Scott, in which Anthony Hopkins reprised his Oscar-winning performance as Hannibal Lecter.

Housed in an embossed paper covered slipcase with an acrylic topcoat.

Bookmark with all orders.