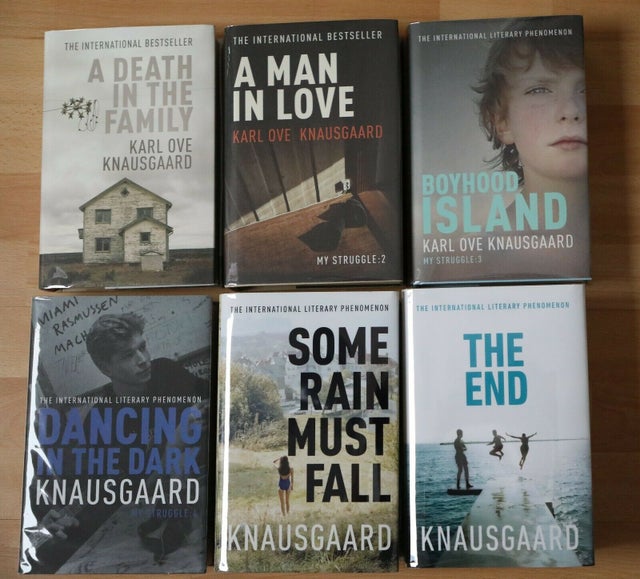 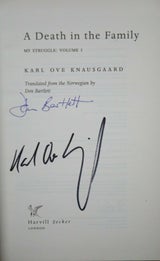 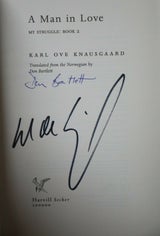 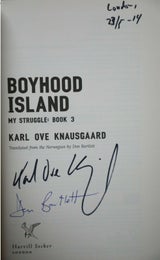 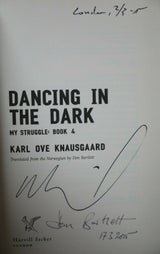 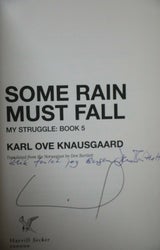 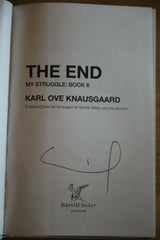 A Death in the Family - signed by the author, and by the translator Don Bartlett

A Man in Love - signed by the author, and by the translator Don Bartlett

Boyhood Island - signed dated and located by the author, signed by the translator Don Bartlett

Dancing in the Dark - signed dated and located by the author, signed by the translator Don Bartlett

Some Rain Must Fall - signed by the author, signed and lined by the translator Don Bartlett

The End - signed by the author

Please note, as a six-volume set this auction may require a postage uplift. Multiple purchases may be combined for potential postage savings.

My Struggle (Norwegian: Min kamp) is a series of six autobiographical novels written by Karl Ove Knausgård and published between 2009 and 2011. The books cover his private life and thoughts, and unleashed a media frenzy upon its release, with journalists attempting to track down the mentioned members of his family. The series has sold half a million copies in Norway alone and has been published in 35 languages.

Though categorized as fiction, the books situate Knausgård as the protagonist and his actual relatives as the cast, with their names mostly unchanged. The books have led some of his relatives to make public statements against their inclusion in Knausgård's novels.

As he struggled to write a novel about his relationship with his father, Knausgård set upon a new project in early 2008: to write less stylistically and deliberately and instead, to "write plainly about his life". He wrote mainly to break his block with the other novel and thought that there would not be an audience for the work. Knausgård would call his friend and fellow writer Geir Angell Øygarden daily and read the work aloud. Angell Øygarden felt that Knausgård needed encouragement to continue, and Knausgård felt that Angell Øygarden was essential to the project. Angell Øygarden eventually listened to 5,000 pages of the novel and proposed the series title, which he felt was perfect. The novel's Norwegian title, Min Kamp, is very similar to Hitler's Mein Kampf. The book's editor, Geir Gulliksen, originally forbade Knausgård from using the title, but later changed his mind. Knausgård's British publisher at the time was not interested in the book, and Knausgård did not protest the German translation publisher's decision to change the title in that region.

"The difficult thing for me is that I want basically to be a good man. That's what I want to be. In this project, I wasn't. It is unmoral, in a way." (Knausgård, to The New Republic, April 2014)

In writing the first book, Knausgård reflected that he did not consider the consequences of writing so candidly about his close relations until he paused on the passage about his grandmother. He circulated the first book to about ten of the largest figures in the book before its release and offered to change their names. His brother and mother did not object, but Knausgård's father's family attempted legal intervention and wanted to block publication, calling the novel, "a book full of insinuations, untruths, false personal characteristics and disclosures". Knausgård was scared, but fixed some errors, changed some names, removed a single person, and published the book without acquiescing to all requests. He later acknowledged that he had a choice and chose to publish "no matter what", and referred to this admission of guilt as "cowardly". Knausgård's wife relapsed into depression upon reading his first book. He added that he would not be able to publish the book again now, but was previously able due to his desperation.

Knausgård had finished two volumes when the first book was released. He had been planning to finish the six volumes within the year, preferring to work under harsh deadlines to combat his writer's block. The book's release began a media frenzy as reporters tracked down the novel's characters, which was simple because his family were the only Knausgårds in Norway. Knausgård went into hiding and shut out the media exposure to write daily. Working almost all day aside from chauffeuring his kids, he could write 20 pages in a day. The 50-page section on his first days with his wife was written in a 24-hour spurt.

Knausgård felt that the third through fifth volumes suffered for the influence of the ongoing controversy that followed the original publication. He wrote the 550-page fifth book in eight weeks. The sixth book has a 400-page essay on Hitler's early life and autobiography. He wanted "unsparing honesty" in the last book "to save the project", and so discarded 400 pages, delayed the book, and wrote about the fallout from the publication of the previous five volumes, including a breakdown suffered by his wife during which she was hospitalized. Knausgård described his portrayal of his wife as "the most painful thing" he has done. His wife, although hurt by portions of the series, did not ask for it to be rewritten and has publicly taken his side.

Though he wrote at the end of his series that he is finished with writing, he plans to write a new and fantastical novel not about his life, and influenced by Jorge Luis Borges and Italo Calvino.