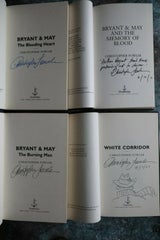 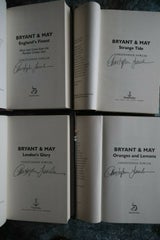 Please note, a taIlored quote will be needed for shipping this set.

17 signed first edition, first printing hardbacks in new and unread condition. All are signed by the author, some by the cover artist (as shown).

Arthur Bryant and John May are Golden Age Detectives in a modern world. They head the Peculiar Crimes Unit, London’s most venerable specialist police team, a division founded during the Second World War to investigate cases that could cause national scandal or public unrest. Originally based above a London tube station, the technophobic, irascible Bryant and smooth-talking modernist John May head a team of equally unusual misfits who are just as likely to commit crimes as solve them.

The novels are written chronologically, but can just as easily be read out of order (in fact, some volumes benefit from doing so, the exceptions being ‘On The Loose’ and ‘Off The Rails’, which should be read together). The cases take on the different styles of the classic detective stories.