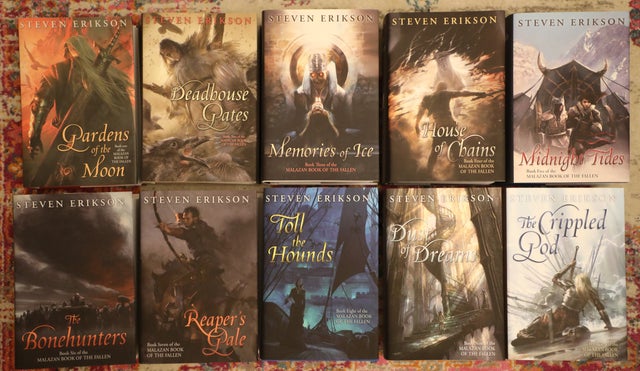 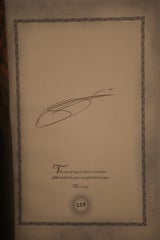 Book 1 - Gardens of the Moon

Book 8 - Toll of the Hounds

Malazan Book of the Fallen is a high fantasy book series by the Canadian author Steven Erikson. The series, published by Bantam Books in the U.K. and Tor Books in the U.S., consists of ten volumes, beginning with Gardens of the Moon (1999) and concluding with The Crippled God (2011). Erikson's series is extremely complex with a wide scope, and presents the narratives of a large cast of characters spanning thousands of years across multiple continents.[1][2][3][4]

His plotting presents a complicated series of events in the world upon which the Malazan Empire is located. Each of the first five novels is relatively self-contained, in that each resolves its respective primary conflict; but many underlying characters and events are interwoven throughout the works of the series, binding it together. The Malazan world was co-created by Steven Erikson and Ian Cameron Esslemont in the early 1980s as a backdrop to their GURPS roleplaying campaign.[5] In 2005, Esslemont began publishing his own series of six novels set in the same world, beginning with Night of Knives. Although Esslemont's books are published under a different series title – Novels of the Malazan Empire – Esslemont and Erikson collaborated on the storyline for the entire sixteen-book project and Esslemont's novels are considered to be as canonical and integral to the series' mythos as Erikson's own.

The series has received widespread critical acclaim, with reviewers praising the epic scope, plot complexity and characterizations, and fellow authors such as Glen Cook (The Black Company) and Stephen R. Donaldson (The Chronicles of Thomas Covenant) hailing it as a masterwork of the imagination, and comparing Erikson to the likes of Joseph Conrad, Henry James, William Faulkner, and Fyodor Dostoevsky.

Please note, this is an extremely heavy set - postage may need adjusting when packed and weighed, depending upon destination and shipping service.