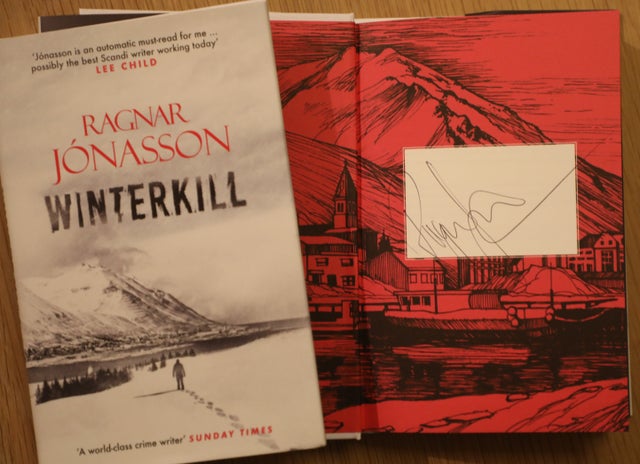 When the body of a nineteen-year-old girl is found on the main street of Siglufjörður, Police Inspector Ari Thór battles a violent Icelandic storm in an increasingly dangerous hunt for her killer … The chilling, claustrophobic finale to the international bestselling Dark Iceland series.

Easter weekend is approaching, and snow is gently falling in Siglufjörður, the northernmost town in Iceland, as crowds of tourists arrive to visit the majestic ski slopes.

Ari Thór Arason is now a police inspector, but he’s separated from his girlfriend, who lives in Sweden with their three-year-old son. A family reunion is planned for the holiday, but a violent blizzard is threatening and there is an unsettling chill in the air.

Three days before Easter, a nineteen-year-old local girl falls to her death from the balcony of a house on the main street. A perplexing entry in her diary suggests that this may not be an accident, and when an old man in a local nursing home writes ‘She was murdered’ again and again on the wall of his room, there is every suggestion that something more sinister lies at the heart of her death…

As the extreme weather closes in, cutting the power and access to Siglufjörður, Ari Thór must piece together the puzzle to reveal a horrible truth … one that will leave no one unscathed.

Chilling, claustrophobic and disturbing, Winterkill marks the startling conclusion to the million-copy bestselling Dark Iceland series and cements Ragnar Jónasson as one of the most exciting authors in crime fiction.

‘Nothing less than a landmark in modern crime fiction' The Times

'This is Icelandic noir of the highest order, with Jónasson's atmospheric sense of place, and his heroine's unerring humanity shining from every page' Daily Mail

'This is such a tense, gripping read' Anthony Horowitz

‘Jónasson’s true gift is for describing the daunting beauty of the fierce setting, lashed by blinding snowstorms that smother the village in “a thick, white darkness” that is strangely comforting’ New York Times