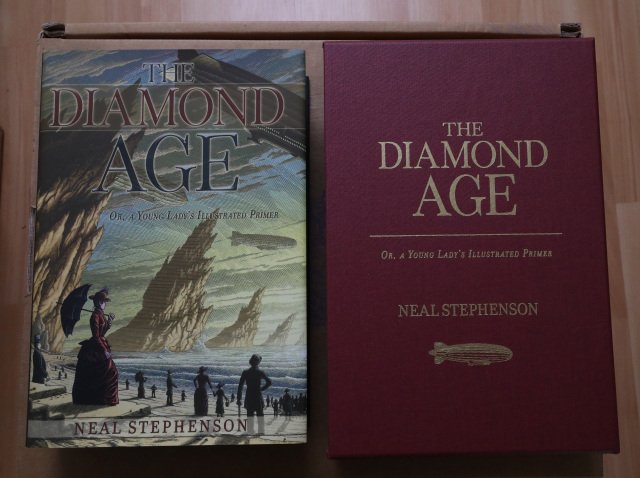 Subterranean Press, US, 2014. Hardcover, Slipcased. Condition: New. Dust Jacket Condition: New. Patrick Arrasmith (illustrator). 1st Edition. 1st/1st - fine/fine signed and numbered by the author - new and unread. A clean, bright, tight copy. One of a number of signed/limited first editions available at the time of listing, and this being one of 4 match-numbered limited editions (all copy number 405 of 500). Please check out my other listings here or at the dedicated Analecta Books web site. First published in 1995, The Diamond Age was Neal Stephenson?s follow-up to Snow Crash, his unforgettable account of a world transformed by Virtual Reality and its attendant technologies. Winner of both the Hugo and Locus Awards for Best Novel, The Diamond Age once again examines the relationship between technological development and social change. Like its predecessor, it is universally recognized as a classic of contemporary science fiction. Set largely in Shanghai several decades after the events of Snow Crash, this brilliantly complex narrative tells a number of interconnected stories. Among the chief protagonists are Nell, a young girl who receives a most unusual education by way of an interactive, neo-Victorian guide called ?Young Lady?s Illustrated Primer,? and John Percival Hackworth, the engineer who designed the primer and who has plans of his own for its use. On one level, The Diamond Age tells the story of an individual education. On another, it offers a thoroughly imagined portrait of a world deeply divided along political, ethnic and cultural lines. It is a world dominated and literally reshaped by advancements in nanotechnology, a branch of science that extends the range of human possibility in bizarre and unexpected ways. One of Stephenson?s overriding concerns, seen in book after book and from a variety of perspectives, has been the impact of technology and scientific thought on the evolution of human society. Dense, witty, frequently astonishing and always absorbing, The Diamond Age occupies a central position in Stephenson?s impressive canon. As convincing and astonishing today as it was nearly twenty years ago, it is the rare sort of novel in which an unbridled imagination and formidable intellect come powerfully ? and seamlessly ? together. Synopsis - The future is small. The future is nano . . . And who could be smaller or more insignificant than poor Little Nell - an orphan girl alone and adrift in a world of Confucian Law, Neo-Victorian values and warring nano-technology? Well, not quite alone. Because Nell has a friend, of sorts. A guide, a teacher, an armed and unarmed combat instructor, a book and a computer: the Young Lady's Illustrated Primer is all these and much much more. It is illicit, magical, dangerous. And it isn't Nell's. It was stolen. And now some very powerful people want to get their hands on this highly desirable object. Nell is about to discover that the world can feel very small indeed . . . Signed by Author(s)