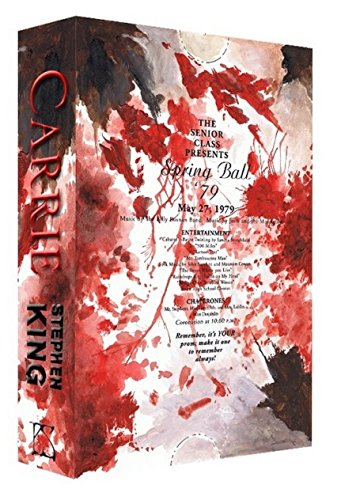 First edition, first impression - new/unread. Copy number 457 in a run limited to just 974 copies worldwide. Signed by Glenn Chadbourne (artist) James Lovegrove (foreword) and Kim Newman (afterword). Stephen King's legendary debut, about a teenage outcast and the revenge she enacts on her classmates, is a Classic. CARRIE is the novel which set him on the road to the Number One bestselling author King is today. Synopsis : Carrie White is no ordinary girl. Carrie White has the gift of telekinesis. To be invited to Prom Night by Tommy Ross is a dream come true for Carrie - the first step towards social acceptance by her high school colleagues. But events will take a decidedly macabre turn on that horrifying and endless night as she is forced to exercise her terrible gift on the town that mocks and loathes her . . .CARRIE: The 40th Anniversary Edition: A NOVEL by Stephen King; PUBLICATION DATE: April 2014; EDITION: Signed, Slipcased Jacketed Hardcover; COVER, ENDPAPER and ALL INTERIOR ART: Glenn Chadbourne; PRINT RUN: 974; Signed by Glenn Chadbourne, James Lovegrove and Kim Newman, plus a facsimile signature from Stephen King; INTRODUCTION: James Lovegrove; AFTERWORD: Kim Newman