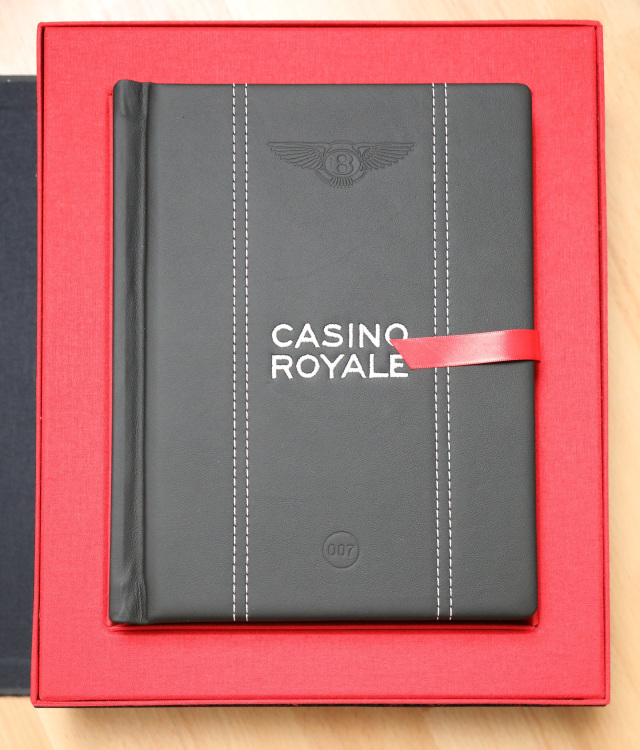 Vintage Classic, UK, 2014. Hardcover, Slipcased. Condition: New. Dust Jacket Condition: New. Damian Gascoigne (illustrator). 1st Edition. Limited Bentley leatherbound 60th Anniversary first edition - only 500 copies worldwide, this copy is unique in that it is signed by Sir Stirling Moss and signed/doodled by the artist Damian Gascoigne Synopsis : Vintage Classics and Bentley Motors create luxury special edition to mark 60 years of Casino Royale Featuring new introduction from Sir Stirling Moss ?Bond?s car was his only personal hobby. One of the last of the 4 ½ litre Bentleys with the supercharger by Amherst Villiers, he had bought it almost new in 1933 and had kept it in careful storage throughout the war Bond drove it hard and well and with an almost sensual pleasure.? Ian Fleming, Casino Royale, 1953 As part of the James Bond celebrations this week to continue the 60th anniversary of Ian Fleming?s first James Bond novel, Casino Royale, it is today announced that Vintage Classics has partnered with Bentley Motors to create a luxury limited edition of the book that introduced Special Agent 007 to the world. The special edition features an exclusive introduction from racing legend, Sir Stirling Moss, making it a true collector?s item. Just 500 editions will be produced. The Bentley is James Bond?s car of choice in the original Fleming novels and Ian Fleming was a huge admirer of the Bentley Boys, seduced by their adventures on the racing track. In his introduction, Sir Stirling Moss comments: ?When it came to cars Fleming really knew his stuff he must have known that the fabulous pre-war Bentleys won at Le Mans four years in a row from 1927-30.? This iconic edition aims to capture that spirit of adventure and the glamour associated with these leading British brands. The book has been created by designers Kris Potter and Stephen Parker at Random House, who were inspired following a trip to the Bentley Motors HQ in Crewe. They comment: ?We knew that any design we came up with would have to reflect the incredible craftsmanship and heritage we had seen in the Bentley cars at Crewe, the challenge for us was how we could combine this with the coolness and nostalgia of Bond. The inspiration was endless.? From the hand-bound beluga leather casing to distinctive Bentley features such as hand-stitched embroidery and silver foil page edges, this special edition of Casino Royale is produced with only the very finest materials. Its striking red, white and black colouring is a nod to the gambling theme of Fleming?s first novel, where Bond famously takes on his adversary, Le Chiffre, over a game of baccarat. A special feature of this edition is the bespoke set of playing cards, hidden within a secret compartment. Key features of the design: * Presented in an elegant leather clamshell case, this edition of Fleming?s best-loved Bond book is an object of automotive craftsmanship. * The case and special edition are bound in beluga coloured leather, sourced from the tannery in Italy which provides hides for Bentley?s interiors. * Using Bentley?s craftsmanship, this edition features the iconic double stitching and signature winged Bentley logo ? all hand stitched on the leather casing. * Bentley?s trademark knurling adorns the metal spine. This feature is inspired by the Bentley steel tread plate. * Each book has a limitation marque with Ian Fleming?s signature, reflecting the plate you would find on a Bentley engine. * Throughout each book are evocative brush illustrations by the Award winning illustrator Damian Gascoigne. * Removing the book from the clamshell reveals a hidden compartment. Within this secret compartment lies a leather-bound case of Bentley Bond playing cards.