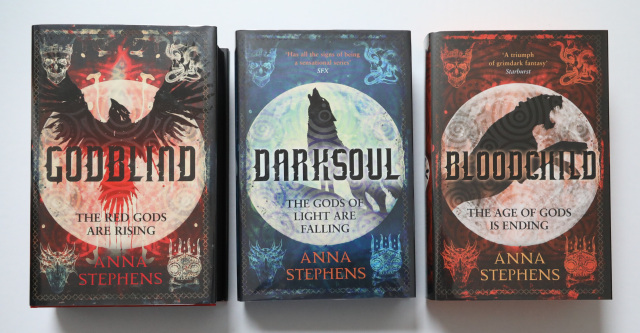 First edition, first impression - full limited edition set, each volume signed and numbered by the author NOTE - THIS THREE-VOLUME SET MAY REQUIRE A POSTAGE UPLIFT Fine condition book, in fine dust jacket - new/unread condition Godblind : Fantasy?s most anticipated debut of the year There was a time when the Red Gods ruled the land. The Dark Lady and her horde dealt in death and blood and fire. That time has long since passed and the neighbouring kingdoms of Mireces and Rilpor hold an uneasy truce. The only blood spilled is confined to the border where vigilantes known as Wolves protect their kin and territory at any cost. But after the death of his wife, King Rastoth is plagued by grief, leaving the kingdom of Rilpor vulnerable. Vulnerable to the blood-thirsty greed of the Warrior-King Liris and the Mireces army waiting in the mountains GODBLIND is an incredible debut from a dazzling new voice of the genre. Darksoul : The thrilling sequel to GODBLIND, the biggest fantasy debut of 2017. The Wolves lie dead beside Rilpor?s soldiers, slaughtered at the hands of the Mireces and their fanatical army. The veil that once kept the Red Gods at bay has been left in tatters as the Dark Lady?s plans for the world come to fruition. Where the gods walk, blood is spilled on the earth. All that stands between the Mireces army and complete control of the Kingdom of Rilpor are the walls of its capital, Rilporin, and those besieged inside. But hope might yet bloom in the unlikeliest of places: in the heart of a former slave, in the mind of a soldier with the eyes of a fox, and in the hands of a general destined to be king. Bloodchild : The thrilling conclusion Rilporin has fallen and Corvus, King of the Mireces, reigns over an occupied land. The raiders and their dark religion have conquered, but victory came at a terrible price ? the death of a god ? and sparks of resistance glimmer on all sides. In the south, Mace gathers the survivors of Rilpor?s armies. Among the fierce tribes of Krike, Crys and Dom search for allies and for the truth of what binds them to the Gods of Light. And in the royal palace itself, Tara ? once a soldier, now a slave ? hopes to ignite a rebellion. But time is against them. A child will soon be born with the power to return the Dark Lady from death, and the long-prophesied final battle for the future of Rilpor and Mireces, of humans and gods, is near.