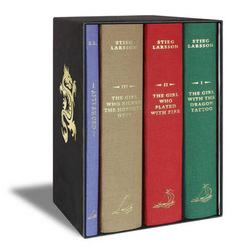 Boxed set comprising revised hardback editions, with maps, of The Girl with the Dragon Tattoo, The Girl Who Played with Fire and The Girl Who Kicked the Hornets' Nest, plus a fourth volume containing essays by those who knew and worked with the author, as well as other original material.

The Girl With the Dragon Tattoo synopsis : Forty years ago, Harriet Vanger disappeared from a family gathering on the island owned and inhabited by the powerful Vanger clan. Her body was never found, yet her uncle is convinced it was murder - and that the killer is a member of his own tightly knit but dysfunctional family. He employs disgraced financial journalist Mikael Blomkvist and the tattooed, truculent computer hacker Lisbeth Salander to investigate. When the pair link Harriet's disappearance to a number of grotesque murders from forty years ago, they begin to unravel a dark and appalling family history. But the Vangers are a secretive clan, and Blomkvist and Salander are about to find out just how far they are prepared to go to protect themselves. Signed by Reg Keeland (translator) in green pen.

The Girl Who Played With Fire synopsis : Millennium publisher Mikael Blomkvist has made his reputation exposing corrupt establishment figures. So when a young journalist approaches him with an investigation into sex trafficking, Blomkvist cannot resist waging war on the powerful men behind this lucrative industry. When the journalist and his girlfriend are found murdered in their apartment, Lisbeth Salander's fingerprints are found on the weapon left at the scene. Now hunted by the entire Swedish police force and officially branded a danger to society, she is forced to go undercover. But how can she prove her innocence? With her computer-hacking skills she is anything but the helpless victim. Signed by Reg Keeland (translator) in red pen.

The Girl Who Kicked the Hornet's Nest synopsis : Salander is plotting her revenge - against the man who tried to kill her, and against the government institutions that very nearly destroyed her life. But it is not going to be a straightforward campaign. After taking a bullet to the head, Salander is under close supervision in Intensive Care, and is set to face trial for three murders and one attempted murder on her eventual release. With the help of journalist Mikael Blomkvist and his researchers at Millennium magazine, Salander must not only prove her innocence, but identify and denounce the corrupt politicians that have allowed the vulnerable to become victims of abuse and violence. Once a victim herself, Salander is now ready to fight back. Signed by Reg Keeland (translator) in silver pen.

Supplementary volume : Extra material in the fourth volume includes an essay by Eva Gedin, Larsson's publisher, on working with the author; an email correspondence between Larsson and Eva Gedin; an essay by John-Henri Holmberg, placing Stieg Larsson in the context of the resurgence of Scandinavian crime writing. Also contains a sketch of the author by artist Chirstoffer Petterssen.

This is a new and unread set, but it has suffered minor wear (a bump to the top left corners of volume two) during its round trip to Reg and back to the UK. The price reflects this damage, being reduced from £500.00 to £325.00 for the set.