Stieg Larsson : The Girl Who Played With Fire - signed and lined 1st edn - SOLD OUT 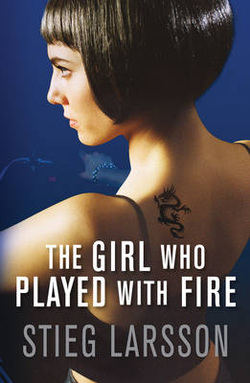 Synopsis : Lisbeth Salander is a wanted woman. Two Millennium journalists about to expose the truth about the sex trade in Sweden are brutally murdered, and Salander's prints are on the weapon. Her history of unpredictable and vengeful behaviour makes her an official danger to society - but no-one can find her anywhere. Meanwhile, Mikael Blomkvist, editor-in-chief of Millennium, will not believe what he hears on the news. Knowing Salander to be fierce when fearful, he is desperate to get to her before she is cornered and alone. As he fits the pieces of the puzzle together, he comes up against some hardened criminals, including the chainsaw-wielding 'blond giant' - a fearsomely huge thug who can feel no pain. Digging deeper, Blomkvist also unearths some heart-wrenching facts about Salander's past life. Committed to psychiatric care aged 12, declared legally incompetent at 18, this is a messed-up young woman who is the product of an unjust and corrupt system. Yet Lisbeth is more avenging angel than helpless victim - descending on those that have hurt her with a righteous anger terrifying in its intensity and truly wonderful in its outcome.

Jacket review : 'The Girl Who Played with Fire is that rare thing - a sequel that is even better than the book that went before... it is to be read in great hungry chunks' Observer. 'It is rare to find a thriller in which the female characters are allowed so much space to be. Lisbeth Salander really is a wonderful creation' Scotsman. 'Astonishing novels... Larsson came up with an entirely new kind of heroine for the crime story... as with Larsson's first novel, this is wonderful stuff' Daily Express. 'A year ago, The Girl with the Dragon Tattoo won ecstatic praise from British critics and readers. Now its successor, The Girl who Played with Fire, has outsold the likes of Patricia Cornwell and James Patterson - once more, another figure seizes the book by the scruff of its neck and binds the reader in fetters of fascination' Independent. 'As with the first book, this complex novel is not just a thrilling read, but tackles head-on the kind of issues that Larsson himself railed against in society, such as endemic establishment corruption and the exploitation of women' Daily Mail. 'In her (Salander) Larsson has created a heroine unique to detective fiction. Where else can you find a bisexual female detective with punk-era fashion sense who just happens to be an expert computer hacker?' Independent.

This is a new and (apparently) unread copy but it has suffered very minor wearing during its round trip to Reg and back to the UK.