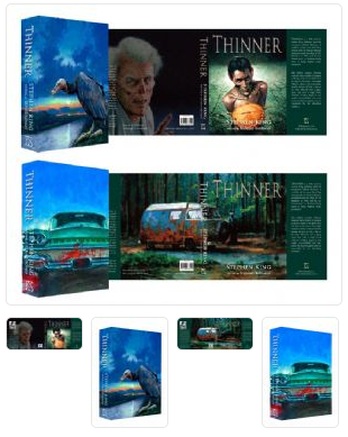 Introduced and signed by Johnny Mains.

Synopsis : Hardnosed lawyer Billy Halleck carries a few pounds more then he should but, hey, he’s happy, content, successful and, well, let’s say ‘highly sexually charged.’ It’s this latter area that’s the cause of all that’s to befall him, when his wife, Heidi distracts him while he’s driving and causes Billy to run down a woman who was part of a group of traveling Gypsies.


The case is kicked out of court (thanks to the judge being a personal friend of Billy) and everyone is happy. Well, everyone, that is, except for the dead woman’s father who’s less than impressed with American justice.
“Thinner,” he whispers in Billy’s ear as he strokes Halleck’s face. And, hoo boy, it’s a retribution that truly takes the cake as, from that very moment onwards, Billy Halleck discovers the diet of the gods. No matter what he puts away, the pounds continue to roll off.

Initially fearing some virulent cancer, Billy is relieved when he gets the all-clear. From then on, he’s happy with his lot: I mean, what’s not to like—clear your plate as many times as you want and you don’t put on an ounce? Hey, come on, right? Except, Billy wonders, how will this condition end? Not well, Billy’s inner voice whispers. Not well at all.

Includes an Introduction from Johnny Mains, colour artwork from both Les Edwards and Edward Miller (Les’ ‘dark half’ if truth be told)—and with Johnny and Les signing all copies—the slipcased state will be a joy to behold.