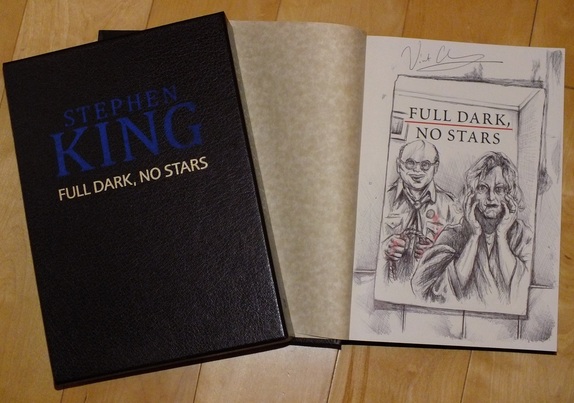 This is an un-numbered PC (publisher Copy) of the slipcased and over-sized Hardcover Gift Edition - one of only 1,750 copies printed in two colors with two color hot foil stamping and marbled endpapers - signed and remarqued by the artist Vincent Chong

Full-color front and back cover artwork by Tomislav Tikulin

Colour and B&W artwork for "1922" by Glenn Chadbourne

Colour and B&W artwork for "Big Driver" by Jill Bauman

About this Deluxe Special Edition: Cemetery Dance Publications is very pleased to announce our Deluxe Special Edition of Stephen King's chilling new collection of novellas. The tales in Full Dark, No Stars are bleak, featuring some of the darkest moments of any King work in recent memory, and we've brought together a team of five acclaimed artists to create sixteen original, exclusive illustrations including black & white pieces and glossy color tip-ins.

This fine collectible volume was published in three editions printed in two colors on a high-quality paper, and the oversized and slipcased Collector's Gift Edition will be issued with the smallest print run of any Stephen King Gift Edition since we published From a Buick 8 in 2002. As many collectors know, that was one of the rare Gift Editions to sell out before publication and to go up in value significantly over the years.

The Cemetery Dance Deluxe Special Edition of Full Dark, No Stars will be the perfect addition to any Stephen King collection.

About the Book: "I believe there is another man inside every man, a stranger . . ." writes Wilfred Leland James in the early pages of the riveting confession that makes up "1922," the first in this pitch-black quartet of mesmerizing tales from Stephen King.

For James, that stranger is awakened when his wife, Arlette, proposes selling off the family homestead and moving to Omaha, setting in motion a gruesome train of murder and madness.

In "Big Driver," a cozy-mystery writer named Tess encounters the stranger along a back road in Massachusetts when she takes a shortcut home after a book-club engagement. Violated and left for dead, Tess plots a revenge that will bring her face-to-face with another stranger: the one inside herself.

"Fair Extension," the shortest of these tales, is perhaps the nastiest and certainly the funniest. Making a deal with the devil not only saves Dave Streeter from a fatal cancer but provides rich recompense for a lifetime of resentment.

When her husband of more than twenty years is away on one of his business trips, Darcy Anderson looks for batteries in the garage. Her toe knocks up against a box under a worktable and she discovers the stranger inside her husband. It's a horrifying discovery, rendered with bristling intensity, and it definitively ends "A Good Marriage."

Like Different Seasons and Four Past Midnight, which generated such enduring films as The Shawshank Redemption and Stand by Me, Full Dark, No Stars proves Stephen King a master of the long story form. 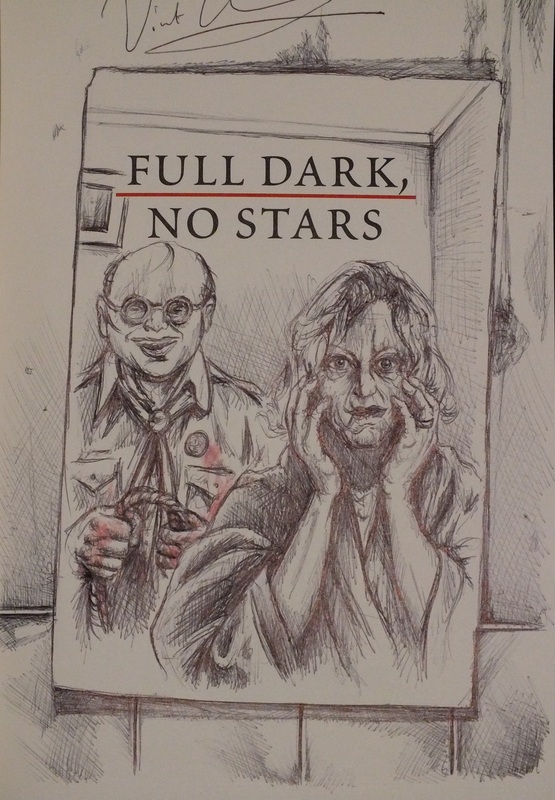