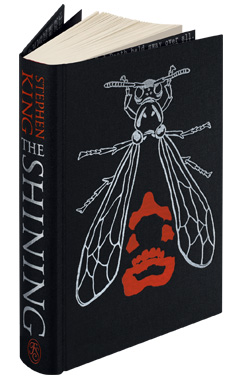 Not signed by Stephen King

The Shining by Stephen King
Illustrated by Edward Kinsella

Synopsis : Jack Torrance is the new winter caretaker of the Overlook, a grand hotel nestled in the isolated Colorado mountains and cut off from civilisation during the harsh cold months. Here, with his wife Wendy and their son Danny, Jack attempts to escape the mistakes of his past and rebuild a life with his family. But the hotel has other ideas. Using Danny’s strange precognitive gift – his ‘shining’ – the evil that lurks inside the Overlook begins to stir, and take hold…


In his introduction, King calls The Shining his ‘crossroads novel’. His first two books – Carrie and ’Salem’s Lot – fall more easily into the category of pure horror, but with this iconic work he decided to reach further. Rather than a two-dimensional villain compelled to madness by supernatural forces, Jack Torrance emerges as a more complex character, one driven to evil by the ghosts of his past. Trapped in the toxic atmosphere of the Overlook, Jack is haunted by the memory of his violent, alcoholic father, the edges of the past and the present blur. Seething underneath the thrills and terror of one of the greatest horror novels ever written is an even more chilling conceit: ‘Aren’t memories the true ghosts of our lives? Do they not drive all of us to words and acts that we regret from time to time?’

Made into a critically acclaimed film by Stanley Kubrick in 1980, King famously felt the movie, at its heart, told a different story to his novel. Award-winning artist Edward Kinsella has provided 11 colour illustrations that capture the book’s vision of the inhuman nature of the Overlook, as well as Jack Torrance’s descent into madness. The binding is emblazoned with a vividly monstrous wasp – a creature which appears as a harbinger of doom in the book – and the endpapers feature the ominous Edgar Allan Poe quote, ‘And the Red Death held sway over all’, repeated over and over in a distinctive typewriter font – a nod to the film version.