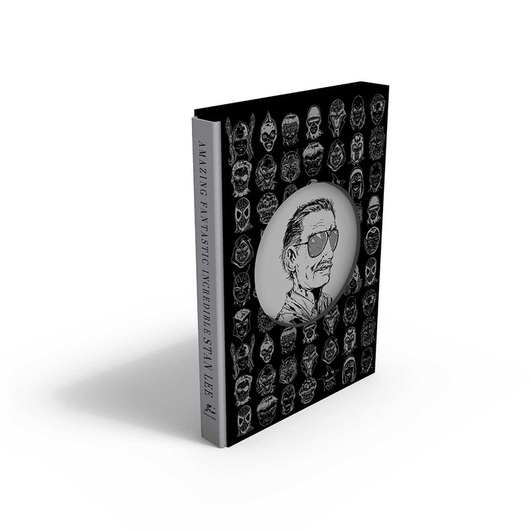 Stan Lee is legendary in the history of comic books, the man behind Spider-Man,
The X-Menand The Incredible Hulk. A graphic-memoir of his life.

*Now produced with superb new illustrations on the endpapers and presented in a
stylish slipcase.

*Stan Lee is the foremost figure in comic books - ever. He is the co-creator of The
X-Men, Spider-Man, The Incredible Hulk,Thor and a whole legion of other super
heroes

*Lee is the face of Marvel Comics as we know it today, and the success of the Marvel industry, fueled by blockbuster films, has made him bigger than ever  *Author is keen to promote at events like ComicCon and Comikaze (25% increases in attendance each year)

*Illustrated by celebrated artist Colleen Doran, handpicked by Lee for this project

Synopsis : Stan Lee is the most legendary name in the history of comic books. The leading creative force behind the rise of Marvel Comics, he brought to life some of the world's best-known heroes and most infamous villains. His stories, featuring super-heroes
who struggled against personal hang-ups and bad guys who possessed previously unseen psychological complexity, added wit and subtlety to a field previously locked into flat portrayals of good v evil. Lee put the human in the super-human. In the
process, he created a new mythology for the twentieth century. In this full-colour graphic memoir illustrated by celebrated artist Colleen Doran,

Stan Lee tells the story of his life with the same inimitable wit, energy and offbeat spirit that he brought to the world of comics. He moves from his impoverishedchildhood in Manhattan to his early days writing comics, foll owed by military training films during World War II, through the rise of the Marvel empire in the 1960s to his current resurgence in movies. This will be a must-have for all fans of comic books and graphic novels.

Stan Lee needs no introduction. Nevertheless, having begun his career with wartime Timely Comics and staying the course throughout the Atlas era, Stan the Man made comic-book history with Fantastic Four #1, harbinger of a bold new perspective in
story writing that endures to this day. With some of the industry's greatest artists, he introduced the Incredible Hulk, Amazing Spider-Man, The X-Men and more,

forming a shared universe for rival publishers to measure themselves against. After a lifetime of writing and editing, Lee entered new entertainment fields and earned Marvel one opportunity after another. He remains one of Marvel's best-known public