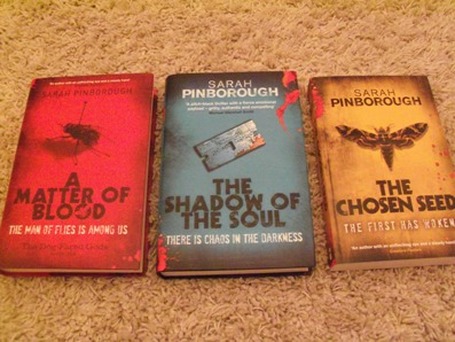 All three titlts have been signed, lined with a quote and dated by the author to the title page.

Synopsis for "A Matter of Blood" : The recession has left the world exhausted. Crime is rising; financial institutions across the world have collapsed, and most governments are now in debt to The Bank, a company created by the world's wealthiest men. But Detective Inspector Cass Jones has enough on his plate without worrying about the world at large. His marriage is crumbling, he's haunted by the deeds of his past, and he's got the high-profile shooting of two schoolboys to solve - not to mention tracking down a serial killer who calls himself the Man of Flies. Then Cass Jones' personal world is thrown into disarray when his brother shoots his own wife and child before committing suicide - leaving Cass implicated in their deaths. And when he starts seeing silent visions of his dead brother, it's time for the suspended DI to go on the hunt himself - only to discover that all three cases are linked . . . As Jones is forced to examine his own family history, three questions keep reappearing: what disturbed his brother so badly in his final few weeks? Who are the shadowy people behind The Bank? And, most importantly, what do they want with DI Cass Jones?

Synopsis for "The Shadow of the Soul" DI Cass Jones is still dealing with the fallout of uncovering a major conspiracy  within his own police station when a terrorist attack rocks London and he finds  himself called on to help with the investigation. At the same time he has his  own investigation to worry about: young people are dying, apparently committing suicide - and they're all linked by the phrase Chaos in the Darkness, scrawled or sent as their last message to the world. Then he's given a note from his dead  brother Christian, written before his murder: the three words - 'They took Luke' - opens up a whole new can of worms, because Cass knows immediately who They are: Mr Bright and the shadowy Network. His dead brother has set him a task from  beyond the grave - to find the baby, his nephew, stolen at birth. And as Cass  tries to divide his time between all three investigations, it's not long before  he discovers links, where there should not be. The mysterious Mr Bright is once again pulling his strings, and there's nothing DI Cass Jones hate more ...

Synopsis for "The Chosen Seed" : His nephew has been kidnapped and, as he works  desperately to save Luke, Detective Inspector Cass Jones has been framed for murder. He's on the run, being hunted by former colleagues, and is unwelcome  wherever he goes ...until he gets help from a very unexpected figure from his past. Detectives Hask and Ramsey are on a different case - searching for the killer behind the lethal Strain II virus currently sweeping its way through London ...a search which throws up an unexpected clue that suggests Cass might be innocent of murder after all. But when they're ordered not to investigate there, they realise the mystery behind the murder is far greater than they thought. Somehow it's linked to Mr Bright, and to the Network which manipulates everyone from the shadows. A rift is growing between these rival factions as Strain II takes a firmer hold on the city, and as the Interventionists warn of a final battle which will bring them all together - or, once and for all, tear everything apart. Cass Jones is going up against The Bank and its sinister employees one last time. He needs every ally he can get, and this time he means  to find answers - even if he has to uncover the true history of humanity to do it. And the more he learns, the more everything hinges on finding Luke ...Set in a future that's close enough to touch, Sarah Pinborough's series combines the streetwise grime of a George Pelecanos mystery with the near-future dystopian setting of Richard Morgan.