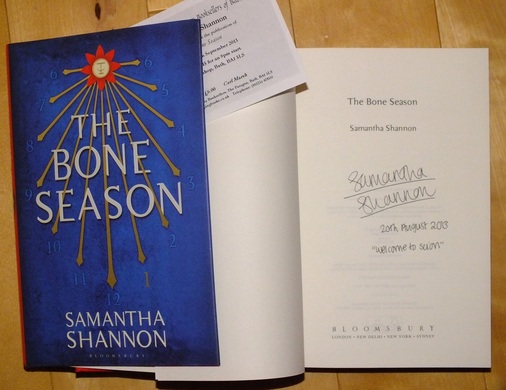 Signed, lined with a quote and dated by the author. Accompanied by a copy of the signing event ticket.

Synopsis : The Bone Season is the first book in a seven-part series of dizzying imagination. Welcome to Scion, no safer place.

The year is 2059. Nineteen-year-old Paige Mahoney is working in the criminal underworld of Scion London, based at Seven Dials, employed by a man named Jaxon Hall. Her job: to scout for information by breaking into people’s minds. For Paige is a dreamwalker, a clairvoyant and, in the world of Scion, she commits treason simply by breathing.

It is raining the day her life changes for ever. Attacked, kidnapped and drugged, Paige is transported to Oxford – a city kept secret for two hundred years, controlled by a powerful, otherworldly race. Paige is assigned to Warden, a Rephaite creature with dark honey skin and heavy-lidded yellow eyes. He is her master. Her trainer. Her natural enemy. But if Paige wants to regain her freedom she must allow herself to be nurtured in this prison where she is meant to die.

The Bone Season Film News : London-based performance capture studio The Imaginarium, founded by Andy Serkis and Jonathan Cavendish, has secured the film rights to The Bone Season by Samantha Shannon.

'The dystopian world created by Samantha in The Bone Season series offers a fantastic setting for a truly extraordinary and thrilling narrative,' said Serkis. 'We are honoured that she chose to collaborate with us in the adaptation of her work.'

Serkis and Cavendish will serve as producers on The Bone Season. 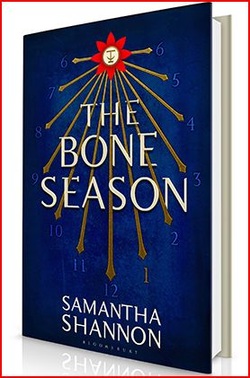