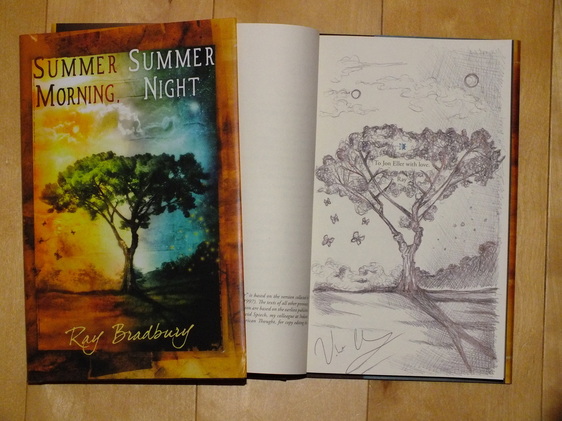 This edition of "Summer Morning, Summer Night" is a deluxe collectable hardcover, meant to give a lifetime of enjoyment. Sold out at the publisher, this numbered edition is endorsed "PC", being one of the rare Publisher Copies not normally intended for resale.

Synopsis : Green Town, Illinois stands at the very heart of Ray Bradbury Country. A lovingly re-imagined version of the author's native Waukegan, it has served as the setting for such modern classics as Dandelion Wine, Something Wicked This Way Comes, and Farewell Summer . In Summer Morning, Summer Night, Bradbury returns to this signature locale with a generous new collection of twenty-seven stories and vignettes, seventeen of which have never been published before. Together, they illuminate some of Green Town's previously hidden corners, and reaffirm Bradbury's position as the undisputed master of a unique fictional universe.

In the course of this volume, readers will encounter a gallery of characters brought vividly to life by that indefinable Bradbury magic. Included among them are a pair of elderly sisters whose love potion carries an unexpected consequence; a lonely teacher who discovers love on Green Town's nocturnal streets; a ten-year-old girl who literally unearths the intended victim of a vicious crime; and an aging man who recreates his past with the aid of a loaf of pumpernickel bread.

Each of these stories is engaging, evocative, and deeply felt. Each reflects the characteristic virtues that have always marked the best of Bradbury's fiction: optimism, unabashed nostalgia, openness to experience, and, most centrally, an abiding generosity of spirit. Summer Morning, Summer Night is both an unexpected gift and a treasure trove of Story. Its people, places, images, and events will linger in the reader's mind for many years to come.

And a note from the book's editor, Jon Eller, on the importance of its contents:

Summer Morning, Summer Night was to be Ray Bradbury's first true novel, a highly personal look back at the rapidly disappearing small-town world of the American heartland. But the transition from a master storyteller to mature novelist is a complex process, and Bradbury was constantly distracted by other major projects and opportunities. Finally, in the winter of 1955-56, after consulting with his Doubleday editor, Bradbury indefinitely deferred publication of the novel by extracting seventeen stories and bridging them (along with three other Green Town tales) into his 1957 masterpiece, Dandelion Wine. That ever-popular book, along with Bradbury's 2006 publication of the original novel, now titled Farewell Summer, finally allows us to see what stories and episodes Bradbury decided to retain as he created two books out of one. However, one crucial part of the creative record has never been collected—the stories, scenes and fragments that Bradbury moved out of both books. The most significant of these deleted titles are gathered for the first time in this new collection of Green Town stories.

End of Summer
The Great Fire
All on a Summer's Night
Miss Bidwell
The Pumpernickel
These Things Happen
At Midnight, in the Month of June
A Walk in Summer
Autumn Afternoon
Arrival and Departure
The Beautiful Lady
Love Potion
Night Meeting
The Death of So-and-So
I Got Something You Ain't Got
The Waders
The Dog
The River That Went to the Sea
Over, Over, Over, Over, Over, Over, Over, Over!
The Projector
The People With Seven Arms
A Serious Discussion (or Evil in the World)
The Fireflies
The Circus
The Cemetery (or the Tombyard)
Summer's End

From Publishers Weekly (Starred Review): “As intoxicating as Bradbury’s legendary Dandelion Wine, the 27 new and old stories in this potent collection resonate with timeless power. All set in Green Town, Ill., the vintage highlights include ‘Miss Bidwell,’ a sweet romance about a spinster and the delayed homecoming of her first love; the brilliant ‘The Screaming Woman,’ featuring the wide-eyed first person narration of a frantic 10-year-old who discovers a woman's premature burial; and ‘At Midnight, in the Month of June,’ in which a killer plays a demented game of hide and seek.”

From Booklist: “In the hearts and minds of Bradbury enthusiasts, Green Town, Illinois, is as treasurable in fantastic literature as Baum’s Emerald City or Lewis’ Narnia. Modeled after the author’s boyhood home of Waukegan, idyllic midwestern Green Town was the setting for Bradbury’s novels Dandelion Wine (1957) and Something Wicked This Way Comes (1962) as well as a handful of short stories… Bradbury’s familiar poetic magic sings in every paragraph, reminding his readers why Green Town is worth visiting again and again.”

From Green Man Review: ”It is best not to come to Summer Morning, Summer Night expecting miracles. They’re here, of course, but tucked inside small pleasures and gossamer wisps of story, barely noticed until you’ve already read past them. Instead, it's best read like an afternoon’s conversation over drinks with a long-lost friend, reveling in the individual moments and memories for their own sake.”