Per Petterson : I refuse - Signed US HB First Edition 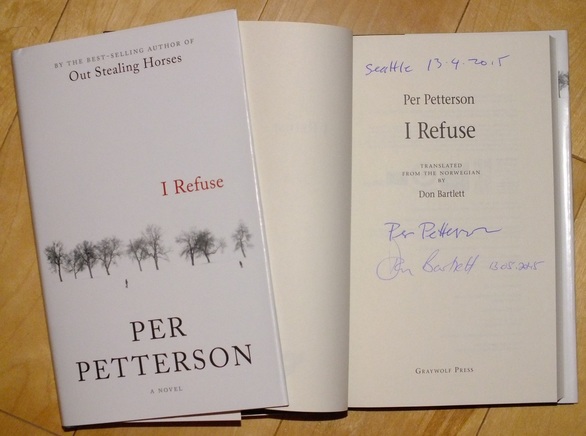 Signed, dated and located (Seattle) by the author.

Signed and dated by the translator Don Bartlett.

A masterful new novel from Per Petterson, who "provides one of literature's greatest gifts … a welcome refuge from our cacophonous world" (NPR)

Synopsis : Per Petterson's hotly anticipated new novel, I Refuse, is the work of an internationally acclaimed novelist at the height of his powers. In Norway the book has been a huge bestseller, and rights have already been sold into sixteen countries. In his signature spare style, Petterson weaves a tale of two men whose accidental meeting one morning recalls their boyhood thirty-five years ago. Back then, Tommy was separated from his sisters after he stood up to their abusive father. Jim was by Tommy's side through it all. But one winter night, a chance event on a frozen lake forever changed the balance of their friendship. Now Jim fishes alone on a bridge as Tommy drives by in a new Mercedes, and it's clear their fortunes have reversed. Over the course of the day, the life of each man will be irrevocably altered. I Refuse is a powerful, unforgettable novel, and its publication is an event to be celebrated.