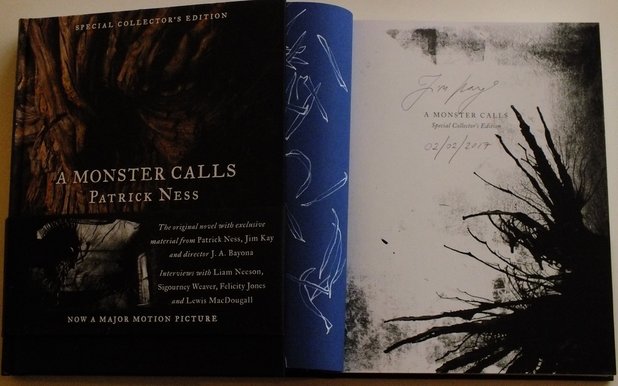 WINNER OF THE CARNEGIE MEDAL 2012 FOR PATRICK NESS, AND THE KATE GREENAWAY MEDAL FOR BOOK ILLUSTRATION 2012 FOR JIM KAY - THE ONLY BOOK EVER TO HAVE WON BOTH AWARDS.

Fom thebookseller.com 24th March 2010 : Author Patrick Ness is to complete a novel begun by Siobhan Dowd, who died in 2007. The novel, which is as yet-untitled, centres around the healing powers of the yew tree. Dowd suffered from breast cancer and the drug, Tomoxifen, used in treatment of such cancer is derived from the yew. In the story, a boy whose mother is ill has to come to terms with her disease, and help arises from this unexpected source. Walker described it as "a dark and funny imaginative journey, circling around the central image of the yew tree". The book will be aimed at the 10-year old market and will be illustrated throughout. Ness said: "I don’t see this as a humourless, po-faced eulogy – I don’t get the feeling Siobhan would have liked that at all – but as a wild ride she and I are going on together. There’s good mischief to be had. I can’t wait to get started."

It was originally commissioned by Denise Johnstone-Burt, publisher at Walker Books, and will be published in May 2011. Walker controls world rights.

Synopsis : This is an extraordinarily moving novel about coming to terms with loss. The monster showed up just after midnight. As they do. But it isn't the monster Conor's been expecting. He's been expecting the one from his nightmare, the one he's had nearly every night since his mother started her treatments, the one with the darkness and the wind and the screaming...The monster in his back garden, though, this monster is something different. Something ancient, something wild. And it wants the most dangerous thing of all from Conor. It wants the truth. Costa Award winner Patrick Ness spins a tale from the final idea of much-loved Carnegie Medal winner Siobhan Dowd, whose premature death from cancer prevented her from writing it herself. Darkly mischievous and painfully funny, "A Monster Calls" is an extraordinarily moving novel of coming to terms with loss from two of our finest writers for young adults.
In this special collector's edition, discover Patrick Ness's original prize-winning illustrated novel and the remarkable story behind the book and film. In exclusive essays and interviews, read how Patrick Ness created a modern classic, and discover Jim Kay's previously unseen sketches for the book. Hear from acclaimed director J.A. Bayona, and go behind the scenes with actors Liam Neeson, Sigourney Weaver and Felicity Jones to find out how the film was made. Full of never before published material and haunting pictures, this stunning edition gives a fascinating and unique insight into the making of both the book and film. A must for all fans.