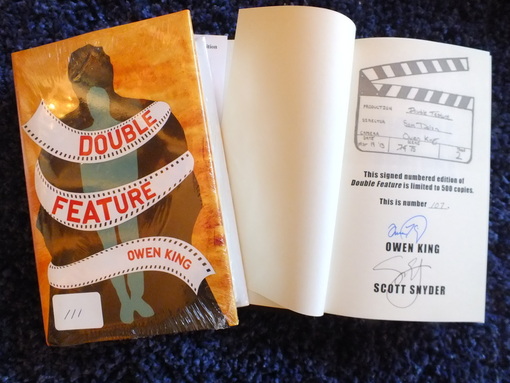 Signed and numbered by the author, and signed by Sam Snyder (afterword).

﻿Owen (son of Stephen) King’s debut novel will be going to the printer before the end of the year and available in late-winter, early-spring of 2014. Owen has added loads of bonus material to the novel making this a truly unique collectible.
﻿
Synopsis : Filmmaker Sam Dolan has a difficult relationship with his father, B-movie actor Booth Dolan—a boisterous, opinionated, lying lothario whose screen legacy falls somewhere between cult hero and pathetic. Allie, Sam’s dearly departed mother, was a woman whose only fault, in Sam’s eyes, was her eternal affection for his father. Also included in the cast of indelible characters: a precocious, frequently violent half-sister; a conspiracy-theorist second wife; an Internet-famous roommate; a contractor who can’t stop expanding his house; a happy-go-lucky college girlfriend and her husband, a deranged ballplayer; the morose producer of a true crime show; and a slouching indie film legend. Not to mention a tragic sex monster.

Unraveling the tumultuous, decades-spanning story of the Dolan Family's friends, lovers, and adversaries, Double Feature is an epic novel about letting go of everything - regret, resentment, dignity, moving pictures, the dead - and taking it again from the top. Combining propulsive storytelling and mordant wit against the backdrop of indie filmmaking, Double Feature brims with a deep understanding of the truths of ambition and art, of relationships and life and of our attempts to survive it all.

This limited edition includes a tip sheet drawn by best-selling author Joe Hill (Heart-Shaped Box, NOS4A2), an afterword by Harvey Award-wining author Scott Snyder (American Vampire, Batman), as well as deleted scenes and other bonus materials that expand on the world of the novel.

"Double Feature is a many-headed comic monster. Its concerns are varied; it’s hilarious first and foremost, but it’s also a heartbreaking and poignant meditation on the vagaries of art. The sweep of the novel is epic." -- Los Angeles Review of Books

"Epic, ambitious, and dedicated to the uncontainable…[King] has a captivating energy, a precision and a fondness for people that are rare…King loves people as well as words, and he has the reach of a novelist…this is the real stuff, I think, and there’s plenty of it." -- The New York Times Book Review 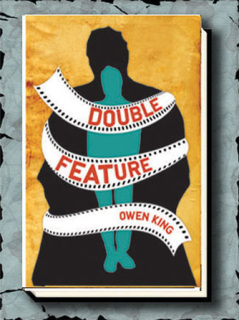