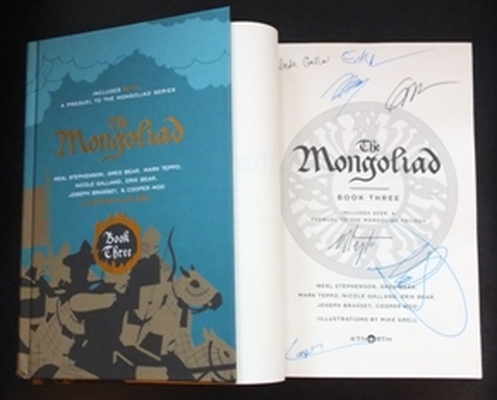 Deluxe hardback collector's edition signed by 7 of the contributors, as well as the cover artist. This edition also contains "Seer", the prequel previously only available as an e-book.

Synopsis : This handsome hardcover edition of The Mongoliad: Book Three features exquisite foil stamping, deckled edges, a ribbon marker, an illustrated character glossary, and a Foreworld map printed on the end- sheets. It also includes Seer: A Foreworld SideQuest. This short story was previously available only digitally and sets up characters and events in The Mongoliad.

The final book of the Mongoliad trilogy from Neal Stephenson and company tells the gripping personal stories of medieval freedom fighters to form an epic, imaginative recounting of a moment in history when a world in peril relied solely on the courage of its people.

The shadow of Holy Roman Emperor Frederick II hangs over the shattered Holy Roman Church as the cardinals remain deadlocked, unable to choose a new pope. Only the Binders and a mad priest have a hope of uniting the Church against the invading Mongol host. An untested band of young warriors stands against the dissolute Khan, fighting for glory and freedom in the Khan’s sadistic circus of swords, and the brave band of Shield- Brethren who set out to stop the Mongol threat single-handedly race against their nemesis before he can raise the entire empire against them. Veteran knight Feronantus, haunted by his life in exile, leads the dwindling company of Shield-Brethren to their final battle, molding them into a team that will outlast him. No good hero lives forever. Or fights alone. 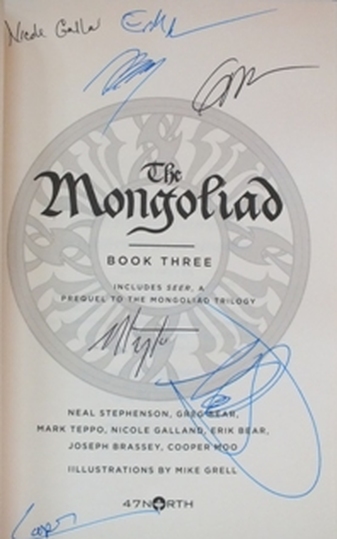