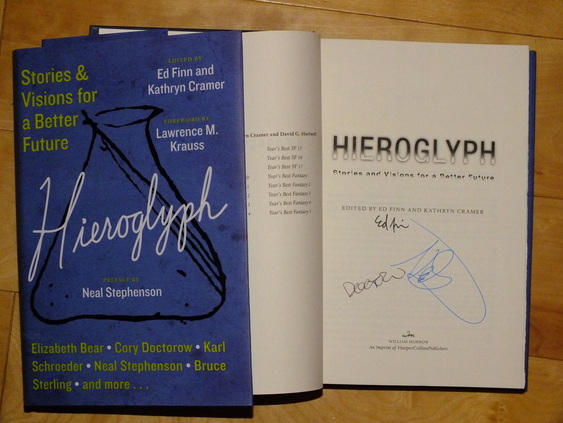 Signed by by Neal Stephenson and Cory Doctorow

Synopsis : ﻿Inspired by New York Times bestselling author Neal Stephenson, an anthology of stories, set in the near future, from some of today’s leading writers, thinkers, and visionaries that reignites the iconic and optimistic visions of the golden age of science fiction.

In his 2011 article “Innovation Starvation,” Neal Stephenson argued that we—the society whose earlier scientists and engineers witnessed the airplane, the automobile, nuclear energy, the computer, and space exploration—must reignite our ambitions to think boldly and do Big Stuff. He also advanced the Hieroglyph Theory which illuminates the power of science fiction to inspire the inventive imagination: “Good SF supplies a plausible, fully thought-out picture of an alternate reality in which some sort of compelling innovation has taken place.”

In 2012, Arizona State University established the Center for Science and the Imagination to bring together writers, artists, and creative thinkers with scientists, engineers, and technologists to cultivate and expand on “moon shot ideas” that inspire the imagination and catalyze real-world innovations.

Now comes this remarkable anthology uniting twenty of today’s leading thinkers, writers, and visionaries—among them Cory Doctorow, Gregory Benford, Elizabeth Bear, Bruce Sterling, and Neal Stephenson—to contribute works of “techno-optimism” that challenge us to dream and do Big Stuff. Engaging, mind-bending, provocative, and imaginative, Hieroglyph offers a forward-thinking approach to the intersection of art and technology that has the power to change our world. 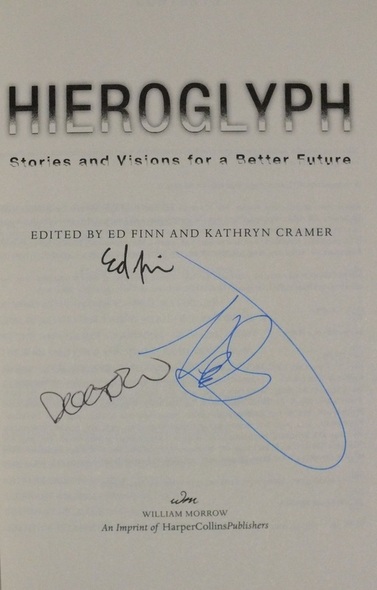 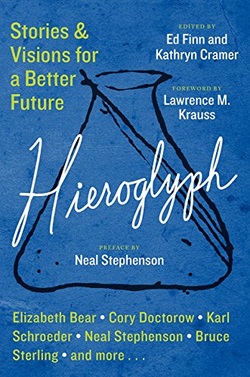