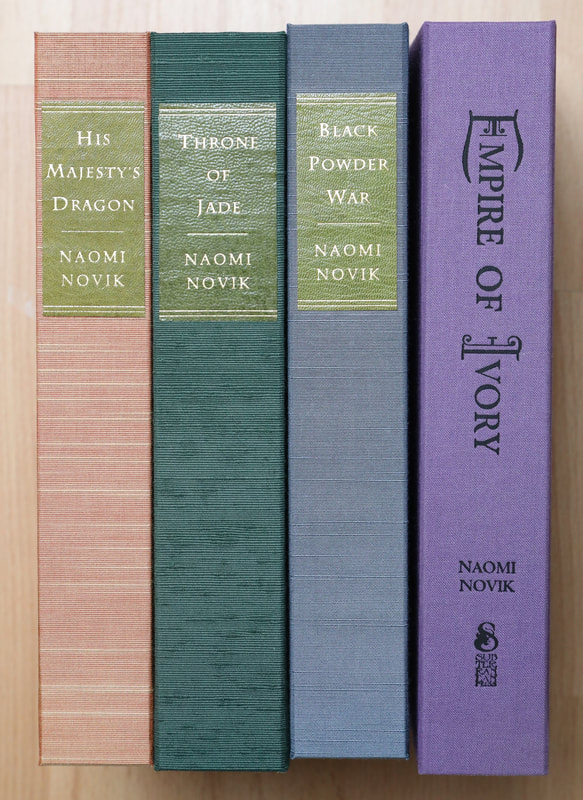 FIrst edition, first impression limited edition set - all 4 volumes presented in a clamshell case, and signed by the author and artist Dominic Harman.

​Synopsis - Naomi Novik’s stunning series of novels follow the global adventures of Captain William Laurence and his fighting dragon Temeraire as they are thrown together to fight for Britain during the turbulent time of the Napoleonic Wars.

Captain Will Laurence has been at sea since he was just twelve years old; finding a warmer berth in Nelson's navy than any he enjoyed as the youngest, least important son of Lord Allendale. Rising on merit to captain his own vessel, Laurence has earned himself a beautiful fiancée, society's esteem and a golden future. But the war is not going well. It seems Britain can only wait as Napoleon plans to overrun her shores.

After a skirmish with a French ship, Laurence finds himself in charge of a rare cargo: a dragon egg bound for the Emperor himself. Dragons are much prized: properly trained, they can mount a fearsome attack from the skies. One of Laurence's men must take the beast in hand and join the aviators' cause, thus relinquishing all hope of a normal life.
But when the newly-hatched dragon ignores the young midshipman Laurence chose as its keeper and decides to imprint itself on the horrified captain instead, Laurence's world falls apart. Gone is his golden future: gone his social standing, and soon his beautiful fiancée, as he is consigned to be the constant companion and trainer of the fighting dragon Temeraire