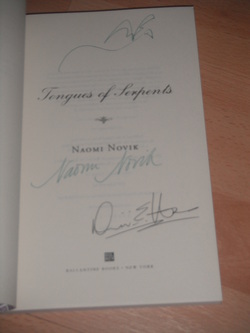 Book 6 in the phenomenon that is Temeraire.

Synopsis : A dazzling blend of military history, high-flying fantasy, and edge-of-your-seat adventure, Naomi Novik¿s Temeraire novels, set in an alternate Napoleonic era in which intelligent dragons have been harnessed as weapons of war, are more than just perennial bestsellers¿they are a worldwide phenomenon. Now, in Tongues of Serpents, Naomi Novik is back, along with the dragon Temeraire and his rider and friend, Capt. Will Laurence. Convicted of treason despite their heroic defense against Napoleon's invasion of England, Temeraire and Laurence, stripped of rank and standing, have been transported to the prison colony at New South Wales in distant Australia, where, it is hoped, they cannot further corrupt the British Aerial Corps with their dangerous notions of liberty for dragons. Temeraire and Laurence carry with them three dragon eggs intended to help establish a covert in the colony and destined to be handed over to such second-rate, undesirable officers as have been willing to accept so remote an assignment - including one former acquaintance, Captain Rankin, whose cruelty once cost a dragon its life. Signed by Author