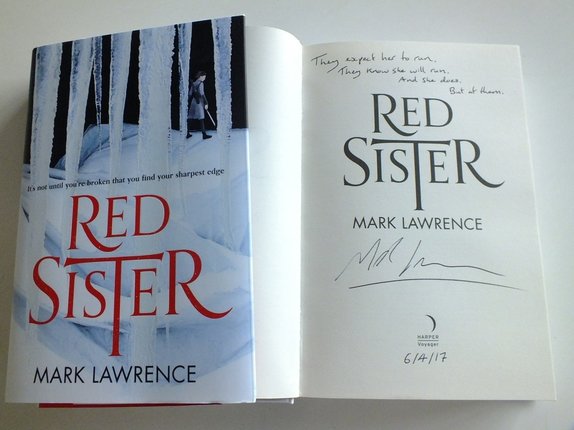 It's not until you're broken that you find your sharpest edge.

A brilliant new series from the bestselling author of PRINCE OF THORNS.

"I was born for killing – the gods made me to ruin"

At the Convent of Sweet Mercy young girls are raised to be killers. In a few the old bloods show, gifting talents rarely seen since the tribes beached their ships on Abeth. Sweet Mercy hones its novices’ skills to deadly effect: it takes ten years to educate a Red Sister in the ways of blade and fist.
But even the mistresses of sword and shadow don’t truly understand what they have purchased when Nona Grey is brought to their halls as a bloodstained child of eight, falsely accused of murder: guilty of worse.
Stolen from the shadow of the noose, Nona is sought by powerful enemies, and for good reason. Despite the security and isolation of the convent her secret and violent past will find her out. Beneath a dying sun that shines upon a crumbling empire, Nona Grey must come to terms with her demons and learn to become a deadly assassin if she is to survive…
A brilliant new series from the bestselling author of PRINCE OF THORNS
​
Bibliographic Details
ISBN : 9780008152291
Publisher: Harper Voyager
Publication Date: 6th April 2017
Binding: Hardback
Book Condition: New
Dust Jacket Condition: New
Signed: Signed by the Author
Edition: First Edition, First Impression