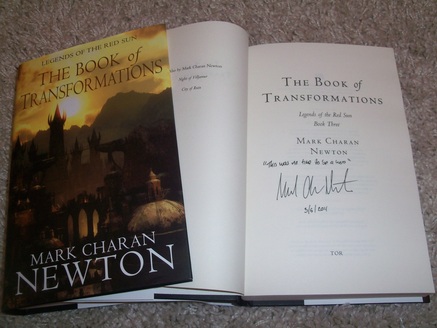 Signed, lined with a quote and dated by the author to the title page. Also available as an SLD limited numbered edition (as are the 2 previous books in this series). Please see images below, and ask for details.

Synopsis : A new and corrupt Emperor seeks to rebuild the ancient structures of Villjamur to give the people of the city hope in the face of great upheaval and an oppressing ice age. But when a stranger called Shalev arrives, empowering a militant underground movement, crime and terror becomes rampant. The Inquisition is always one step behind, and military resources are spread thinly across the Empire. So Emperor Urtica calls upon cultists to help construct a group to eliminate those involved with the uprising, and calm the populace. But there's more to The Villjamur Knights than just phenomenal skills and abilities - each have a secret that, if exposed, could destroy everything they represent. Investigator Fulcrom of the Villjamur Inquisition is given the unenviable task of managing the Knights', but his own skills are tested when a mysterious priest, who has travelled from beyond the fringes of the Empire, seeks his help. The priest's existence threatens the church, and his quest promises to unweave the fabric of the world. And in a distant corner of the Empire, the enigmatic cultist Dartun Sur steps back into this world, having witnessed horrors beyond his imagination. Broken, altered, he and the remnants of his cultist order are heading back to Villjamur. And all eyes turn to the Sanctuary City, for Villjamur's ancient legends are about to be shattered ...

I also have some limited numbered editions of  "The Book of Transformations", as well as "Nights of Villjamur" and of "City of Ruin". At least 2 of the 3 will be match-numbered (it has not been possible to secure matching numbers of all 3 books).  If you want any of these (book 1 is in VERY short supply) please let me know.

Synopsis for "Nights of Villjamur" : Political intrigue and dark violence converge in a superb new action series of enthralling fantasy. An ice age strikes a chain of islands, and thousands come to seek sanctuary at the gates of Villjamur: a city of ancient spires and bridges, a place where banshees wail the deceased, cultists use forgotten technology for their own gain and where, further out, the dead have been seen walking across the tundra.When the Emperor commits suicide, his elder daughter, Rika, is brought home to lead the Jamur Empire, but the sinister Chancellor plans to get rid of her and claim the throne for himself. Meanwhile a senior investigator in the city inquisition must solve the high-profile and savage murder of a city politician, whilst battling evils within his own life, and a handsome and serial womanizer manipulates his way into the imperial residence with a hidden agenda. When reports are received that tens of thousands of citizens are dying in a bizarre genocide on the northern islands of the Empire, members of the elite Night Guard are sent to investigate. It seems that, in this land under a red sun, the long winter is bringing more than just snow.

Synopsis for "City of Ruin" : Villiren: a city of sin that is being torn apart from the inside. Hybrid creatures shamble through shadows and barely human gangs fight turf wars for control of the streets. Amidst this chaos, Commander Brynd Lathraea, commander of the Night Guard, must plan the defence of Viliren against a race that has broken through from some other realm and already slaughtered hundreds of thousands of the Empire's people. When a Night Guard soldier goes missing, Brynd requests help from the recently arrived Inqusitor Jeryd. He discovers this is not the only disappearance the streets of Villiren. It seems that a serial killer of the most horrific kind is on the loose, taking hundreds of people from their own homes. A killer that cannot possibly be human. The entire population of Villiren must unite to face an impossible surge of violent and unnatural enemies or the city will fall. But how can anyone save a city that is already a ruin? 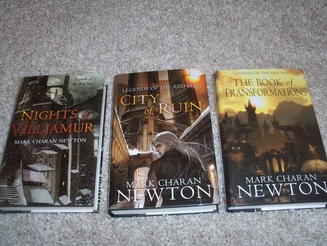