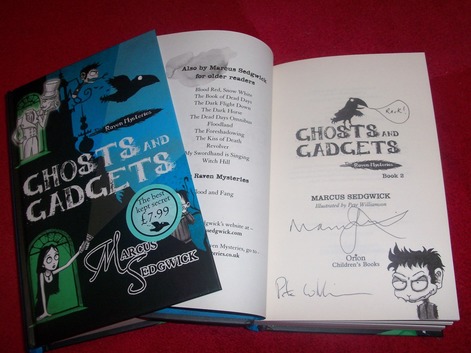 Orion Children's Books, UK, 2009. Hardcover. Book Condition: As New. No Jacket. Peter Williamson (illustrator). First Edition, First Impression. Signed by the author to the title page. Also signed and hand-illustrated by the illustrator Peter Williamson - 1st/1st fine/fine. Illustrated with a unique (one-of-a-kind) drawing, very rare - This is the second in a projected series of 6 books. I also have copies of books 1 and 3, similarly treated. Join the wonderfully weird Otherhand family and their faithful guardian, Edgar the raven, and discover the dark secrets of Castle Otherhand. The rumblings and wailings from the Lost South Wing can no longer be ignored, as one by one, members of the castle are being found frozen, 'scared to death'. With mother, Minty, obsessing over her latest fad - sewing - and father, Valevine, busy experimenting with a machine to discover the Lost Otherhand treasure, it's up to aspiring ghost-hunters Solstice and Cudweed to solve the mystery. But as usual, things don't go quite as planned.It's just as well Edgar is there to save the day! Second in a brand new six book series of tales of mystery (with a touch of goth-froth) for 9 year olds from bestselling author, Marcus Sedgwick. With quirky black and white line illustrations from new talent, Pete Williamson. Publisher and industry reviews: "There is hilarious fun to be had in these mystery stories about the original, not to say odd, family who live in Otherhand Castle. Told by Edgar the Raven whose views are sharp even if his perspective is unusual, the upside down existence of Solstice and her father Valevine, an inventor determined to find the Lost Otherhand Treasure, is a delightful and surprising romp." "The only word I can use to adequately describe The Raven Mysteries series is 'hilarious'. This second installment includes creepy ghosts and useless gadgets, and a plethora of characters that get more likeable with each chapter. I just know that when I need something fun to read, this series will be the first that I turn to. They're kooky and cool, and definitely not just for younger readers." -- Jenny Davies WONDROUS READS "A delightfully gothic and quirky tale told from the bird's eye perspective of Edgar the old Raven" tBk MAGAZINE "Sedgqick's bizarre bunch are enhanced by the creepy illustrations in this amusing and fast-paced story" DAILY MAIL. Signed by Author and Illustrator.

Double-signed and remarqued copies of the following Raven Mysteries titles are available on this site;