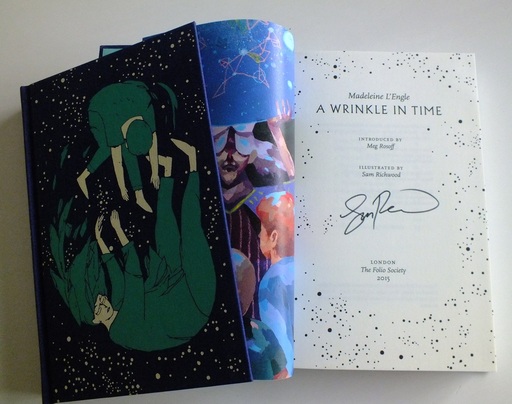 Signed by the artist Sam Richmond

Synopsis : Meg Murry, bespectacled, gangly and an outcast at school, desperately misses her father, a quantum physicist who has mysteriously disappeared. But when she and her precocious little brother, Charles Wallace, meet ancient shape-shifters Mrs Whatsit, Mrs Who and Mrs Which, they and their friend Calvin O’Keefe are swept away on an adventure across time and space to rescue their father.

A heady blend of fantasy, suspense thriller and science fiction, A Wrinkle in Time is deliciously fast-paced and brimming with rich wordplay. The children travel to the planet Camazotz, a sinister place where everyone must conform. Here they join a cosmic battle to defeat the Black Thing, an evil force spreading its shadows over Earth, and the all-consuming power of IT. When Charles Wallace falls under IT’s hypnotic control, Meg must search inside her own heart for the means to save him, remembering her father’s wise words, ‘Don’t be afraid to be afraid.’

Like so many other books now considered classics, A Wrinkle in Time was rejected by dozens of publishers. In her introduction to this Folio edition, which is accompanied by colourful paintings by Sam Richwood, Meg Rosoff suggests that this could only be because Madeleine L’Engle’s masterpiece was ‘too odd, too unruly, too difficult to pigeonhole, too full of ideas, too scratchy, too ahead of its time. Too different. In short, too good.’ Finally published in 1962, it won America’s most important prize for children’s books, the Newbery Medal, and has since sold millions of copies.

The characters face psychological battles, fall in love and grapple with Euclidean geometry. They learn that individuality is worth standing up for, as L’Engle well knew, despite her book’s numerous rejections: ‘You have to write the book that wants to be written. And if the book will be too difficult for grown-ups, then you write it for children.’

Madeleine L’Engle was born in 1918 in New York. She studied in Switzerland and the United States, graduating with honours from Smith College in Massachusetts in 1941. Returning to New York, she worked in the theatre before her first novel, The Small Rain, was published in 1945. She went on to write over 60 books for children and adults, including collections of essays, plays, and poetry. A Wrinkle in Time (1962) won the Newbery Medal, and L’Engle was awarded the Margaret A. Edwards lifetime achievement award from the American Library Association in 1998, and the National Humanities Medal in 2004. She died in 2007.

Bound in cloth, blocked with a design by Sam Richwood
Set in Scala Pro with Albertus display
192 pages
Frontispiece and 6 colour illustrations
9" × 5¾"