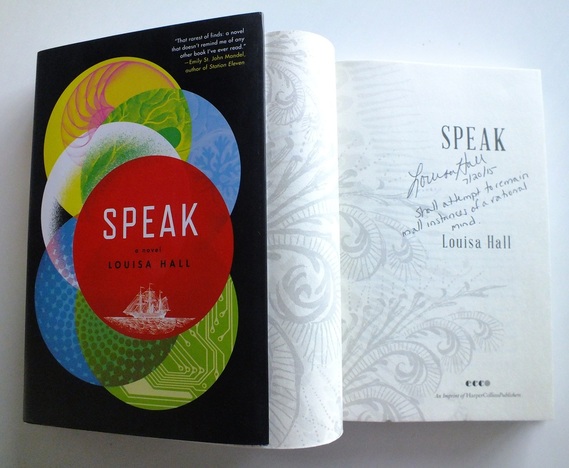 Synopsis : A thoughtful, poignant novel that explores the creation of Artificial Intelligence—illuminating the very human need for communication, connection, and understanding.

In a narrative that spans geography and time, from the Atlantic Ocean in the seventeenth century, to a correctional institute in Texas in the near future, and told from the perspectives of five very different characters, Speak considers what it means to be human, and what it means to be less than fully alive.

A young Puritan woman travels to the New World with her unwanted new husband. Alan Turing, the renowned mathematician and code breaker, writes letters to his best friend’s mother. A Jewish refugee and professor of computer science struggles to reconnect with his increasingly detached wife. An isolated and traumatized young girl exchanges messages with an intelligent software program. A former Silicon Valley Wunderkind is imprisoned for creating illegal lifelike dolls.

Each of these characters is attempting to communicate across gaps—to estranged spouses, lost friends, future readers, or a computer program that may or may not understand them. In dazzling and electrifying prose, Louisa Hall explores how the chasm between computer and human—shrinking rapidly with today’s technological advances—echoes the gaps that exist between ordinary people. Though each speaks from a distinct place and moment in time, all five characters share the need to express themselves while simultaneously wondering if they will ever be heard, or understood.

﻿Philip Meyer (PM): Speak tells the story of five characters who are involved in creating an artificially intelligent doll. What drew you to the topic of artificial intelligence?

Louisa Hall (LH): I've always been interested in the characters involved in artificial intelligence, from Alan Turing, who first conceptualized the field as we know it, to the mostly unrecognized women who programmed the earliest computers, to the refugees from Nazi Germany who were integral to advancing computing in the middle of the twentieth-century. So many of them came from marginalized quarters of society and had been told at some point that their minds were inferior, or that their humanity was in question. It’s interesting to me that those people would devote their lives to creating a new kind of intelligence, one that would also cause people to recoil in anxiety.

PM: The version of the future you depict in Speak is unique: you describe isolated "eco-developments" in which children grow up without ever going out into the real world. What made you imagine that kind of future?

LH: The eco-developments in the book are based on the sprawling suburban developments that already exist around many cities in America: weirdly self-contained, artificial environments that seem to have sprung fully formed out of an ecologically inhospitable environment. Gaby’s eco-development, "The Plantation," is based on a development I've visited outside of Houston, also (inappropriately enough) called "The Plantation." It has its own schools, its own drug stores, its own movie theaters, its own artificial ponds. It would be easy to live your whole life without leaving. That kind of societal self-enclosure is a little disturbing to me. The more we rely on cars for transportation and technologies for communication, the more it’s possible to live our lives sealed off from other people. I can imagine a future in which that isolation becomes increasingly problematic.

PM: The artificially intelligent dolls you describe in the book are banned because they’re "excessively lifelike." Do you think machines will come to life?

LH: I think their particular kind of intelligence will become increasingly sophisticated, but I'm not sure that means they’ll "come to life." Machine intelligence is different from ours, which is derived from a combination of genetics and experience, hormones and brain chemistry, and probably a host of other mysterious factors that we don't understand. Ideally, as machines become smarter, they’ll challenge us to develop our own uniquely human intelligence. Whether that will mean we're more alive is another question. Probably, if there's any doubt, it's best to err on the side of assuming something's alive. It's better than making the opposite mistake.

PM: The book spans five centuries, from the story of a pilgrim in the seventeenth century to the story of a girl in the near future who becomes paralyzed when her doll is taken from her. Why did you decide to cover so much time in the novel?

LH: As I was researching the history of artificial intelligence, I was also finishing a dissertation on early modern poetry. I was amazed at how often writers in the seventeenth century talk about books in the same way we talk about artificial intelligence: as cutting-edge technologies capable of containing human patterns of language and thought. In the seventeenth century, books were the terrifying frontier of artificial intelligence. People were burned alive for reading or writing dangerous books. The urge to develop a technology that could think like us but also outlast us has always existed; so has the reactionary desire to limit such technology before it gets out of control.

PM: The characters in the novel have a terrible time communicating with the people they're closest to, but they speak freely with various kinds of technology. Do you think there’s something about technology that allows for more open communication?

LH: In some ways, yes. Whether the technology is a pencil or a computer, it's easier to express yourself when you're not face to face with a person. There's a reason I became a writer instead of, say, a doctor, which is the other career I considered. It's easier to be eloquent when you’re facing a blank screen, not a human face, and you have all the time in the world. But then again, the challenge of being honest and eloquent when you're face to face with a person is equally important, and I should probably practice it more.﻿