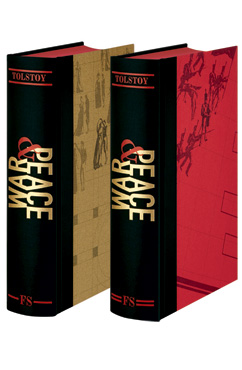 Signed and remarqued by the illustrator Igor Karash

Synopsis : Among the most influential novels of all time, Leo Tolstoy’s War and Peace is set against the great political events surrounding Napoleon’s attempted invasion of Russia in 1812. Boasting over five hundred characters, the sprawling narrative focuses on the fortunes and struggles of five aristocratic families. Featuring both real and fictional protagonists, from lowly foot soldiers to Napoleon himself, Tolstoy weaves a literary and historical epic that has never been equaled.

This edition features the highly acclaimed 2007 translation by Richard Pevear and Larissa Volokhonsky. Much criticism has been levelled against previous attempts to ‘anglicise’ and ‘smooth’ Tolstoy’s often idiosyncratic prose. Here the translation remains as close as possible to the original language. Tolstoy’s tendency towards repetition, which, as critic and author James Wood writes in his new preface, he uses ‘almost liturgically, or psalmically’, was removed in earlier Victorian translations as it did not fit the mould of what was considered ‘good writing’. As Pevear states in his introduction, ‘We have tried to be true to Tolstoy’s rhetorical power, his sharp irony, and his astonishing delicacy.’

Igor Karash’s poignant illustrations, 15 in each volume, including two double-page spreads, often spill out of their margins. Much like the prose, the images are both intimate and sweeping, mirroring the expansive nature of Tolstoy’s history, and the individual’s place within it. This edition also features a striking binding design with the spines blocked in gold and coloured page tops and 30 colour illustrations by Igor Karash. It is a fine edition of one of the great masterpieces of world literature.

A sprawling social panorama, a brilliant work of historical philosophy, a masterpiece of Russian storytelling – Tolstoy’s magnum opus has always evaded classification. Homeric in tone and biblical in scope, it is unquestionably one of the most important books ever written. From the flash of a smile at a genteel Petersburg soirée to the sweeping arm of la grand armeé tugging at the very fabric of Europe, the details that Tolstoy draws on in his writing are as varied and boundless as Russia itself. As the journalist Isaac Babel commented after turning the last page, ‘If life could write, it would write like Tolstoy.’

Told predominantly through the lives of the Rostov and Bolkonsky families, and the naive aristocrat Pierre Bezukhov, the story spans the years 1805 to 1812, as Napoleon’s armies draw inexorably closer to the heart of Russia. Under the gathering darkness of war, Tolstoy brings to life some of literature’s richest characters: the impulsive, beguiling Natasha Rostov, the proud and ambitious Prince Andrei Bolkonsky, and the guileless Pierre Bezukhov, searching for spiritual fulfilment. This enthralling epic follows the interconnected marriages, affairs, heartbreaks and struggles of these very different aristocratic families, as Tolstoy uses the building blocks of strained partings and emotional reunions, deaths and loves, to shape his all-pervading masterpiece.

The complexities of 19th-century Tsarist society are set against the chaos and terrors of war in a cinematic narrative that sweeps across the vistas of Austerlitz, Borodino’s bloody fields and the burning city of Moscow. Tolstoy’s descriptions, drawn from his own experience in the Crimean War, are chillingly real, and convey an astonishing level of detail, from the horrors of amputation to the panic and disbelief felt in the heat of the cavalry charge. As James Wood writes in his newly commissioned preface, Tolstoy aimed to ‘correct the “official” record … truth, you feel, is being battled for, with whatever literary weapons come to hand’. Tolstoy deftly weaves historical discourse with fictional prose, consistently subverting our traditional understanding of genre. The narrative is regularly interrupted by didactic essays and opinion pieces, Tolstoy placing himself at the centre of his account to examine how the events he draws on relate to a wider philosophical context. He enigmatically refused to refer to his work as a novel, ‘even less is it a poem, and still less a historical chronicle’.

Exhibition by the artist Igor Karash