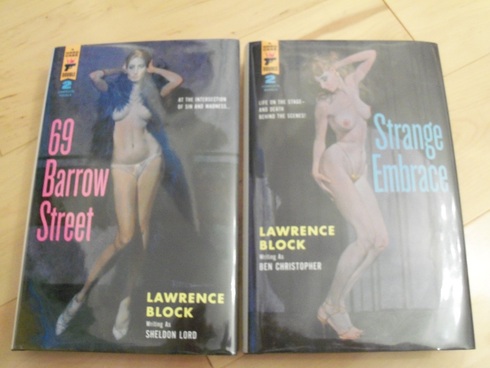 Please note this is one volume (not two) that includes both titles.

They say the show must go on—but in the case of Broadway’s next sensation, A Touch of Squalor, someone’s out to make sure the show never opens. And when threats don’t do the trick, a straight razor to the throat just might.

It’s a case for the NYPD…but with a mysterious killer targeting his cast, producer Johnny Lane can’t just wait in the wings. There’s a Playbill full of suspects, giving Johnny the casting challenge of his career: who to put in the role of murderer, when the wrong call could bring down the curtain on his show—or his life!

Published here for the first time in half a century—and the first time ever under the author’s real name--Strange Embrace is one of MWA Grand Master Lawrence Block’s earliest detective novels, presented in the classic Ace Doubles format with new cover art by the legendary Robert McGinnis. It’s two times the Block, and for fans of his whodunits who want to see where it all began, it’s cause for a standing ovation…

Greenwich Village: home to every form of depravity and perversion known to man…or woman.

It’s on the streets of the Village that Ralph met Stella—but what started as a love affair between a painter and his seductive muse has become torment as he’s found himself drawn into her world of cruel pleasures. It is a tinderbox of hatred and desire—and when beautiful Susan Rivers moves into their apartment building, tempting Ralph and Stella both, it’s set to ignite.

From dim waterfront bars to the movie houses of Times Square, from nights in rat-trap hotel rooms to drug-fueled orgies in ground-floor apartments, no one can bring 1960s New York to life like Edgar Award winner Lawrence Block. And in this early tale of psychological suspense—unavailable for fifty years and never before published under his real name—readers will discover a harrowing portrait of men and women pushed to their limits and beyond. Presented in the classic Ace Doubles format, with new cover art by the legendary Robert McGinnis, it’s a double shot of darkness as only Lawrence Block can deliver it.

A Note to Readers: These books were written in an earlier, gentler time. Actually, no — scratch that. Nothing gentler about it, despite what some nostalgia-addled souls will tell you; but earlier for sure. Half a century ago, specifically. And books from in that era inevitably reflect the attitudes and mores of that era. Worse than that, actually, when you’re talking about pulp fiction, which reflected not the median attitudes and mores but the rather more colorful and extreme attitudes publishers of that era thought readers of such lurid books would enjoy seeing in their late-night guilty-pleasure entertainment. When the publishers in question went to writers of the caliber of Lawrence Block to pen their books, they often got a more nuanced portrayal than they expected, required or even wanted — but still, even the Lawrence Blocks were working off the same brief as the less talented house scribblers and were expected to fill their books with the same elements. (And at the ripe old age of 23, not to mention dependent on his book-a-month gig to pay his rent and food bills, Block wasn’t in much of a position to push back.)

Why mention any of this? So that if you find some swinish or outdated attitudes between these handsome covers you are not surprised and do not judge too harshly. What you’ll encounter here is far from the worst stuff you might turn up in a random pulp novel of 50 years ago, but you will find some things that will make you either roll your eyes or wince, depending on your tolerance for such things. There are orgies and drugs and insanity and sexual cruelty and “perversions” of every stripe (including some that will strike a modern reader as so mild and commonplace that it’s hard to imagine what all the excitement’s about). There’s frigidity and sadism and masochism and all the other bits that were tumbling out of the psychoanalytic cabinet and onto the page in the early 1960s. Oh — and a Japanese manservant. Because, you know. What detective novel’s complete if it doesn’t have a Japanese manservant in it?

In short, these are books that would not — could not — be written today, and three cheers for progress: the benighted world we live in is at least not quite as benighted as it used to be.