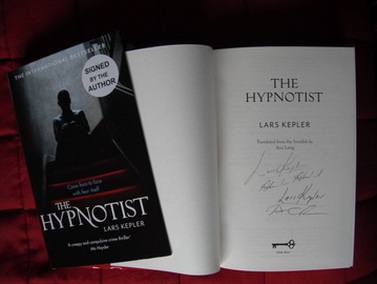 Signed first edition of what is set to be a hugely popular and influential crime series. Signed by the husband-and-wife writing team of Alexander and Alexandre Andhoril (using BOTH their real names and the nomme-de-plume Lars Kepler). Lovely copies.

Synopsis You need clues. You need time. You need a motive. You won't have any of them. When a whole family is murdered in Stockholm, Detective Inspector Joona Linna knows there is only one person who can help find the perpetrator. Erik Maria Bark, retired hypnotist, is called in to work with Josef Ek, a fifteen-year-old boy who witnessed the brutal murder of his family. Following a series of accusations by his patients, Erik is reluctant to return to his craft but makes an exception for Joseph Ek. As he delves deep into the boy's mind, he discovers that Josef murdered his own family on the orders of his sister Evelyn. When Joona and Erik journey deep into the woods to find Evelyn, she admits that she was abused by her brother for many years. When she refused to submit to him, he took revenge on the entire family. When Josef escapes from custody and Erik's only son Benjamin disappears from the family home, Erik is thrust into a world of violence and gang warfare, forcing him to revisit his past to discover the truth.

Update : Oscar-nominated director Lasse Hallström (The Cider House Rules) has signed on to direct a Swedish adaptation of best selling crime novel The Hypnotist by Lars Kepler, reports The Hollywood Reporter. This is the first Swedish film in 24 years that Lasse Hallström will direct, and is the first in a planned franchise based on Lars Kepler's Detective Joona Linna series, which are the most successful Swedish crime novels worldwide after Stieg Larsson's Millennium trilogy. In the novel, Detective Linna investigates a grisly triple homicide where the only survivor, a young boy, is too traumatized to testify. Linna convinces a famous psychologist, against his better judgment, to hypnotize the boy, setting off a terrifying chain of events. Lasse Hallström will begin shooting this winter for a planned 2012 release in Sweden.