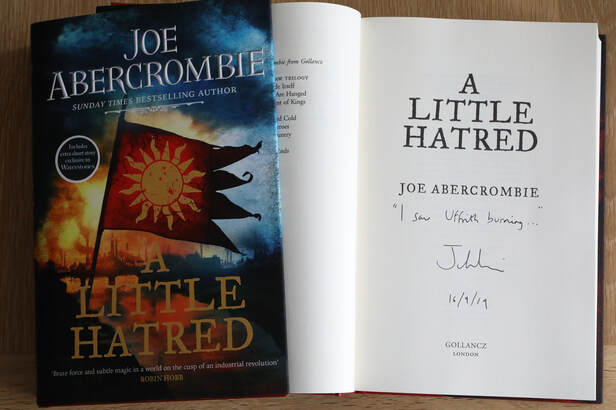 First edition, first impression - signed, lined with a quote and pre-publication-dated by the author at the launch event in Cardiff on 16th September 2019.

Introducing a cast of unforgettable new characters, A LITTLE HATRED is the start of a brand new trilogy set in the world of the First Law which will have you gripped from the very start . . .

The chimneys of industry rise over Adua and the world seethes with new opportunities. But old scores run deep as ever.

On the blood-soaked borders of Angland, Leo dan Brock struggles to win fame on the battlefield, and defeat the marauding armies of Stour Nightfall. He hopes for help from the crown. But King Jezal's son, the feckless Prince Orso, is a man who specialises in disappointments.
Savine dan Glokta - socialite, investor, and daughter of the most feared man in the Union - plans to claw her way to the top of the slag-heap of society by any means necessary. But the slums boil over with a rage that all the money in the world cannot control.

The age of the machine dawns, but the age of magic refuses to die. With the help of the mad hillwoman Isern-i-Phail, Rikke struggles to control the blessing, or the curse, of the Long Eye. Glimpsing the future is one thing, but with the guiding hand of the First of the Magi still pulling the strings, changing it will be quite another . . .