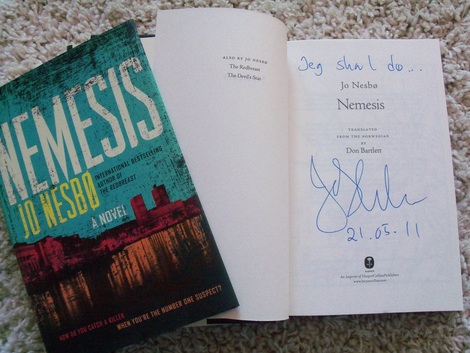 Synopsis : Grainy CCTV footage shows a man walking into a bank and putting a gun to a cashier's head. He tells her to count to twenty-five. When he doesn't get his money in time, she is executed. Detective Harry Hole is assigned to the case. While Harry's girlfriend is away in Russia, an old flame gets in touch. He goes to dinner at her house and wakes up at home with no memory of the past twelve hours. The same morning the girl is found shot dead in her bed. Then Harry begins to receive threatening e-mails. Is someone trying to frame him for this unexplained death? Meanwhile the bank robberies continue with unparalleled savagery. Gripping and surprising, Nemesis is a thriller by one of the biggest stars of Scandinavian crime fiction. Also available, SLD copies of "The Snowman".