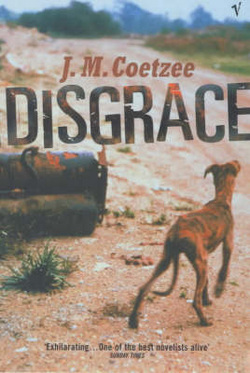 An excellent copy, in near-mint condition. Signed and dated by the author (accompanied by a photograph of the signing event).

Synopsis : A divorced, middle-aged English professor finds himself increasingly unable to resist affairs with his female students. When discovered by the college authorities, he is expected to apologise and repent in an effort to save his job, but he refuses to become a scapegoat in what he see as as a show trial designed to reinforce a stringent political correctness. He preempts the authorities and leaves his job, and the city, to spend time with his grown-up lesbian daughter on her remote farm. Things between them are strained - there is much from the past they need to reconcile - and the situation becomes critical when they are the victims of a brutal and horrifying attack. In spectacularly powerful and lucid prose, Coetzee uses all his formidable skills to engage with a post-apartheid culture in unexpected and revealing ways. This examination into the sexual and politcal lawlines of modern South Africa as it tries desperately to start a fresh page in its history is chilling, uncompromising and unforgettable. Jacket review " The richness of Disgrace lies in the elegant and allegorical role reversals, the spare symbolism of the language and in the characterization. We may not like David Lurie, but in Coetzee's skillful hands we can't dismiss him without pity." -- "The Globe and Mail" " Coetzee is able to dissect the human psyche with a surgeon's touch." -- "The Hamilton Spectator" " Marvellous." -- "The National Post" " Disgrace is a subtle, multilayered story, as much concerned with politics as it is with the itch of male flesh. Coetzee's prose is chaste and lyrical -- it is a relief to encounter writing as quietly stylish as this." -- "Independent" " Disgrace is at the frontier of world literature." -- "Sunday Telegraph" " J.M. Coetzee's vision goes to the nerve-centre of being. What he finds there is more than most people will ever know about themselves, and he conveys it with a brilliant writer's mastery of tension and elegance." -- Nadine Gordimer UK Kirkus review This is a bleak, pessimistic, spare book about the new South Africa, winner of the 1999 Booker Prize. In a departure from his usual more allegorical style, Coetzee tells with searing realism the story of the disgrace of a university professor from Cape Town, David Lurie, and his subsequent wanderings in search of some sort of resolution. Lurie has an affair with a student; the student is impressionable, but far from infatuated with him. Her boyfriend intervenes and a complaint of sexual harassment is made against him. He resigns without offering any sort of defence. Coetzee mounts a searing attack on the kind of political correctness pervasive in a society which cannot control even the simplest manifestations of crime, including rape and armed robbery. When Lurie goes to live with his somewhat hippy daughter in a country district, the already dark story becomes darker still. He helps at an animal sanctuary, which becomes a procession of death; virtually all the animals are put down. Here Coetzee is evoking the prospect of a holocaust; it is disturbing. But Lurie's impressions of his daughter's black neighbour and occasional worker, a man who clearly has designs on her property, are more disturbing still. They are shot through with ambivalence. While this man is able to offer help and stability, Lurie also sees him as the face of the new realities. His daughter must either submit to these or leave. Armed robbers arrive at the property; they set Lurie alight and rape his daughter. His daughter's reaction, to Laurie's horror, is a sort of acceptance. This is Coetzee's point: the whites in South Africa are going to have to accept new realities or leave the country. These realities include the debasement of language and the acceptance of warlordism and naked power. Lurie is an expert on the Romantic poets and his aspect of the new So. Signed by Author(s).