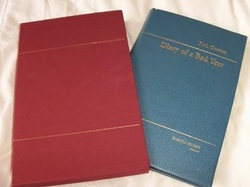 Leather-bound slipcased edition in mint condition (unread) - one of 100 copies, this is number 32.

An eminent, seventy-two-year-old Australian writer is invited to contribute to a book entitled "Strong Opinions". It is a chance to air some urgent concerns. He writes short essays on the origins of the state, on Machiavelli, on anarchism, on al Qaida, on intelligent design, on music. What, he asks, is the origin of the state and the nature of the relationship between citizen and state? How should the citizen of a modern democracy react to the state's willingness to set aside moral considerations and civil liberties in its war on terror, a war that includes the use of torture?He is troubled by Australia's complicity with America and Britain in their wars in the Middle East; an obscure sense of dishonour clings to him. In the laundry-room of his apartment block he encounters an alluring young woman. When he discovers she is 'between jobs' he claims failing eyesight and offers her work typing up his manuscript. Anya has no interest in politics but the job provides a distraction, as does the writer's evident and not unwelcome attraction toward her. Her boyfriend, Alan, an investment consultant who understands the world in harsh neo-liberal economic terms, has reservations about his trophy girlfriend spending time with this 1960s throwback. Taking a lively interest in his affairs, Alan begins to formulate a plan.