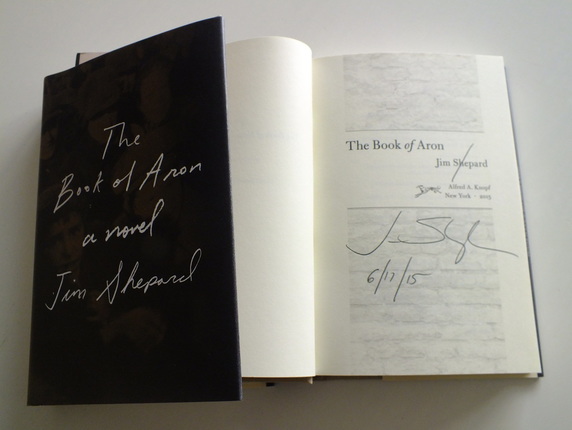 Synopsis : The acclaimed National Book Award finalist—“one of the United States’ finest writers,” according to Joshua Ferris, “full of wit, humanity, and fearless curiosity”—now gives us a novel that will join the short list of classics about children caught up in the Holocaust.

Aron, the narrator, is an engaging if peculiar and unhappy young boy whose family is driven by the German onslaught from the Polish countryside into Warsaw and slowly battered by deprivation, disease, and persecution. He and a handful of boys and girls risk their lives by scuttling around the ghetto to smuggle and trade contraband through the quarantine walls in hopes of keeping their fathers, mothers, brothers, and sisters alive, hunted all the while by blackmailers and by Jewish, Polish, and German police, not to mention the Gestapo.

When his family is finally stripped away from him, Aron is rescued by Janusz Korczak, a doctor renowned throughout prewar Europe as an advocate of children’s rights who, once the Nazis swept in, was put in charge of the Warsaw orphanage. Treblinka awaits them all, but does Aron manage to escape—as his mentor suspected he could—to spread word about the atrocities?
Jim Shepard has masterfully made this child’s-eye view of the darkest history mesmerizing, sometimes comic despite all odds, truly heartbreaking, and even inspiring. Anyone who hears Aron’s voice will remember it forever.

“A masterpiece. . . a remarkable novel destined to join the shelf of essential Holocaust literature. . . . a story of such startling candor about the complexity of heroism that it challenges each of us to greater courage. . . . Shepard has created something transcendent and timeless.” —Ron Charles, The Washington Post

“[Shepard’s] narrow perspective creates an uncanny tension and lets us feel the horror in a way that feels fresh and freshly devastating. . . . The Book of Aron doesn’t let you put it down, doesn’t let you stop reading until you get to the end [and] you’ve lived a lifetime with Aron—for better and for worse, you’ve done what he’s done and thought what he’s thinking.” —Tony Perez, Tin House

“It is the relationship between Aron and Korczak that sits at the heart of the novel [and] it is in the orbit of this entirely good man that Aron’s scarred heart begins to heal and expand. . . . Shepard is well known for his media res endings; there is some small mercy in the fact that he employs such an ending here.” —Geraldine Brooks, The New York Times Book Review

“This magnificent tour de force will hold a prominent place in the literature of compassionate outrage. . . . Shepard, a writer of extraordinary historical vision, psychological acuity, and searing irony, presents a profoundly moving portrait of Korczak; explores, with awe, our instinct to adapt and survive; and through the evolving consciousness of his phenomenally commanding young narrator, exposes the catastrophic impact of war and genocide on children.” —Donna Seaman, Booklist (starred review)

“Shepard’s gift for drawing out the most elemental, human narratives against a backdrop of tremendous scale reaches its apex in The Book of Aron.” —Benjamin Rybeck, Kirkus Reviews

“The Book of Aron ennobles unimaginable suffering through the gift of art.” —Harvey Freedenberg, Shelf-Awareness

“Shepard has created a stark masterpiece.  His brilliant, iconic book ranks with the best literature that explores the dark side of the human soul.” —Linda Diebel, The Toronto Star

“Understated and devastating. . . . an exhaustively researched, pitch-perfect novel exploring the moral ambiguities of survival [in which] ordinary people reveal dimensions that are extraordinarily cruel or kind.”  —Kirkus Reviews (starred)

“The story of what happened to children in the Holocaust is not for the faint-hearted. A fictional, first-person narrative from the point of view of a Jewish child in Warsaw—in fact, a child in Dr. Janusz Korczak’s well-known orphanage in the Warsaw Ghetto—is very brave. And a heartbreaking historical novel that ends in Treblinka may not be what many readers are expecting from a novelist and short-story writer whose ironic touch is often comedic. But Jim Shepard has written a Holocaust novel that stands with the most powerful writing on that terrible subject.” —John Irving

“Heartbreaking but never sentimental, comic but never unserious, terrifying but always engrossing, The Book of Aron brings us face to face with the unimaginable, actual truth.” —Daniel Handler

“Heart-breaking, shattering, charming and brilliant—there isn’t one word that isn’t the young boy’s. Jim Shepard has written some of the best books I’ve read and The Book of Aron is his best.” —Roddy Doyle

“The Book of Aron is a novel of profound and delicate simplicity—passivity, almost—but one which calmly and indelibly delivers the bluntest of impacts. In other words, it’s a knock-out (though you never saw it coming.)” —Jim Crace

“This moving novel bears witness to human complexity with an uncompromising compassion.  It is a testament not only to Janusz Korczak and the children in the Warsaw Ghetto but to every child abandoned in war.  History must open our hearts to the present and this is Jim Shepard's powerful achievement.” —Anne Michaels, author of Fugitive Pieces.

About the Author : JIM SHEPARD is the author of six previous novels and four story collections, including Like You’d Understand, Anyway, which was a finalist for the National Book Award and won The Story Prize. His short fiction has appeared in, among other magazines, The New Yorker, Harper’s Magazine, McSweeney’s, The Paris Review, The Atlantic, Esquire, Tin House, Granta, Zoetrope, Electric Literature, and Vice, and has often been selected for The Best American Short Stories and The PEN/O. Henry Prize Stories. He lives in Williamstown, Massachusetts, with his wife and three children, and teaches at Williams College.