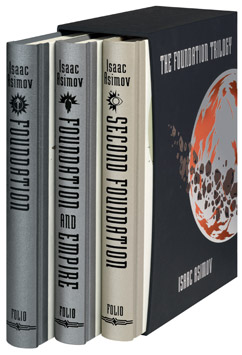 Details : The Foundation Trilogy (Winner of the Hugo Award for Best All-Time Series).

In 1941, Isaac Asimov, a young scientist and writer, was inspired by Edward Gibbon’s "History of the Decline and Fall of the Roman Empire" – and by contemporary global politics – to write an epic for his own age. He set out to tell of ‘the fall of the Galactic Empire and the return of feudalism, written from the viewpoint of someone in the secure days of the Second Galactic Empire’. The result was The Foundation Trilogy, an etraordinary science fiction epic that raises profound questions. Why do empires rise and fall? How is society best run? Can history be predicted? Asimov explores these ideas in a multi-layered, ingenious story that is as gripping today as when it was first published.

Foundation - It is the heyday of the Galactic Empire. Nearly 25 million inhabited planets are ruled by this civilisation, which has existed since time immemorial. But one man has dared to predict the Empire's fall. Hari Seldon is a pioneer of the science of psychohistory, which predicts the patterns of mass behaviour, and he has foreseen galactic war. He establishes two Foundations; one to preserve Imperial knowledge, the other whose purpose and location are unknown. As the Empire collapses, the First Foundation’s inhabitants labour on their Encyclopedia Galactica – unaware that an even more important role has been predicted for them by Seldon.

Foundation and Empire - In the second book, the Foundation has grown in power to rival the dying Empire. With superior technology, and access to energy that other planets lack, it receives tributes from the rest of the Galaxy, all in accordance with the Seldon Plan. But this plan does not take into account the rise of a rogue individual: the Mule, a warlord with the power to manipulate thoughts and emotion. All that stands between the Mule and total conquest of the Galaxy is the mysterious Second Foundation; but its location is a secret that others will die to protect.

Second Foundation - The mule has conquered the Galaxy – or most of it. The First Foundation’s leaders have been either killed, or ‘Converted’. Yet the Mule is still haunted by the existence of the Second Foundation. It is located at ‘Star’s End’ of the Galaxy; but what does that mean? And does this other Foundation even exist? The Mule sends his most loyal general, a former resistance leader who is now brainwashed, and Bail Channis, an ambitious young man whose mind is still free, to investigate. But others are searching for it too, including the 14-year-old Arcadia Darell, who understands Seldon’s plan better than many of her elders.