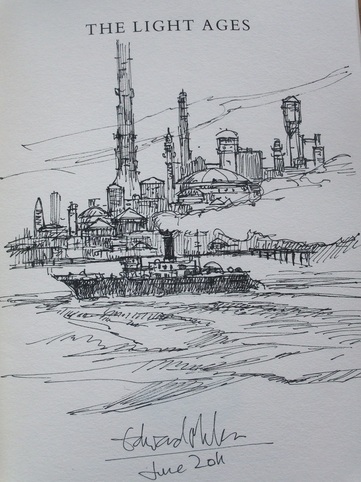 This copy has been signed by the artist Ed Miller who has also remarqued it with a full-page sketch.

Synopsis : In the year 1678, Joshua Wagstaffe discovered aether, and the Industrial Revolution began. Not the Industrial Revolution of our world; but one fuelled by magic. Aether, its secrets jealously guarded by the Guilds, became the glue that bound English society together. Now, after three hundred years, change is finally in the air. The talk on the streets of London is of Revolution, of overturning the Guilds, of a New Beginning. The Third Age of Industry is ending, in fire and in death...Raised in the Yorkshire town of Bracebridge, and seemingly destined to follow his father into the aether factories, Robert Borrows witnesses the dark side of aether when his mother is transformed into a changeling; monstrous and pitiful. Fleeing to London, Robbie joins the revolution, working to bring about the Fourth Age, an era of equality and plenty. Roaming the vast, Brobdignagian city, all colours, smells and danger, exploring its myriad social layers, from petty criminals and revolutionaries to salon mistresses and opium dreamers, Robbie discovers secrets that threaten the very fabric of society; secrets that involve the deepest mysteries of aether. He becomes embroiled in the glittering social circle of the mysterious Anna Winters - beautiful, mercurial, beguiling - and finds that the past is not so easily cast off. For Robbie and Anna's fates have been intertwined since before their birth - since the infamous day when the aether engines of Bracebridge stopped working, and the world was deafened by the roar of silence. The day the seeds of change were sown...

Publisher and industry reviews UK Kirkus review Reminiscent of Charles Dickens's Great Expectations, this is a vivid rags-to-riches story set in a country very like Victorian England but where the main source of power is a magical substance called aether rather than the steam which powered our own industrial revolution. MacLeod's England is coming to the end of the Third Age of Industry, social inequality is growing and the stocks of aether are getting dangerously low. MacLeod's protagonist is Robert Borrows, son of a lowly guildsman (everything is controlled by powerful guilds) and we see the ensuing violence and environmental catastrophe through his eyes. Borrows sees his mother horrifically transformed by exposure to aether into a changeling - hideous and dangerous creatures who are stuck in a netherworld between fairy and human. He runs away to London and gets involved with a gang intent on social change, then falls in love with Anna, a changeling who has the power to change everything. MacLeod's alternative history is not quite dystopian but is an interesting parable for the lengths that power-hungry men and women will go to when the source of their wealth starts to run out. He cleverly illustrates that, whether the energy comes from magic spells or industrial machines, those intent on personal profit at the expense of others are likely to be mean-spirited, careless with others' lives and criminal in their actions. With enough elements to make his strange, magic world familiar Ian MacLeod has written a book that would be an ideal stepping stone for those readers who have experienced fantasy via the usual starting points of Pratchett or Tolkien and want to explore the genre further. (Kirkus UK).